CBS Evening News anchor Katie Couric has been on a five-day trip to the Mideast with Defense Secretary Robert Gates. She files her final post from aboard a C-17 cargo plane.

Flying to an American airbase in Incirlik, Turkey from Kabul in a C-17 cargo plane, a massive, lumbering aircraft which is like traveling in a Beacon's moving van in the sky, almost as long as a city block. Rather than troops and equipment it's carrying the Defense Secretary's staffers and policy experts and the dozen or so members of the media who've been following him around all week.

Today I sat down with Mr. Gates for our final interview. We covered a lot of ground on Afghanistan and Pakistan. Meanwhile, I can't see him as I write this. He's safely ensconced inside something called "the silver bullet" that looks like a futuristic rail car ... but it's really an Airstream trailer updated with what's called "a comfort package." He and his staffers stay and work inside it away from the deafening noise (thank you Bose) and cavernous interior. He emerged once in his jeans and white shirt to pick up four bags of chips, etc., from a table that's set up outside.

Today was interesting with breathtakingly beautiful scenery. The press boarded a Chinook helicopter and went to a forward operating base (FOB) in Wardak province, southwest of Kabul. There are FOBs strategically located throughout the country, basically bases that the U.S. and other troops can use. I saw some Dutch and British during my trip. There are some 32,000 international troops in all. General McKiernan and Secretary Gates both told me they were disappointed with NATO's commitment and some of the caveats to it (won't go to certain areas, etc).

Meanwhile, I learned that those who don't leave their bases are called "fobbits." Very Tolkien. 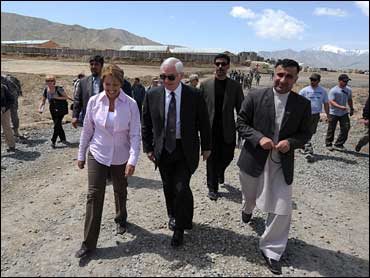 (CBS)
There were some Afghan tribal leaders there, as well as the Governor of the province, briefing Gates on a new initiative that trains locals to guard their villages. I met the Afghan head of the program -- a thin man in a dark green uniform who's really quite brave. He's received death threats but told me (through a translator, of course) that he wasn't afraid of the Taliban.

I spent a lot of time chatting with soldiers from the 10th Mountain Division out of Fort Drum, New York. I interviewed them with my Flip and I'll put the videos on my YouTube channel next week.

All in all, it's been an extraordinary experience. The Chinook pilots let me sit in the jumpseat up in the cockpit on the leg to Kabul. Flying over the city, which looks much less primitive than the area right around the base, with its hotel and office buildings, they told me they didn't worry about RPG's (rocket propelled grenades) except in certain areas in the north. In those cases, they would fly there under cover of darkness. They sometimes see the tracers from small arms fire, and if it just happens to hit the wrong place on the helicopter, that can be devastating. They did say they are always on the lookout for kites over Kabul, and actually spotted one on our trip. They sometimes fly them 600 feet in the air. (I didn't ask them if they are covered with ground glass a la "Kite Runner.")

As I write this I am sitting in the cockpit of the C-17 with a great crew of pilots ... three of them got laid off from their commercial jobs after 9/11. They're based out of McGuire Air Force base in New Jersey. They're heading to Germany after they drop us off. All incredibly nice, smart guys.

Who knows if this mission in Afghanistan will be a success? There is so much to accomplish…building infrastructure including wells, bridges and schools, providing jobs, transitioning poppy farmers to growing other legal crops, securing populated areas, winning trust while protecting the locals from being recruited or killed by the Taliban ... Oh, and wiping out the Taliban and keep them from providing training areas for al Qaeda, not to mention training an Afghan police force and army and establishing governmental institutions where none exist. This is the challenge.

The good news is most of the troops I talked to believe in the mission and that it is possible to succeed. Surviving in these conditions -- a vast, dry roasted dustbowl -- they have to believe.

Words like sacrifice, dedication and patriotism have become so overused in recent years they've almost become white noise. Coming here and meeting the troops reminds me what those words mean, and just as I felt when I left Iraq, I am humbled and in awe.