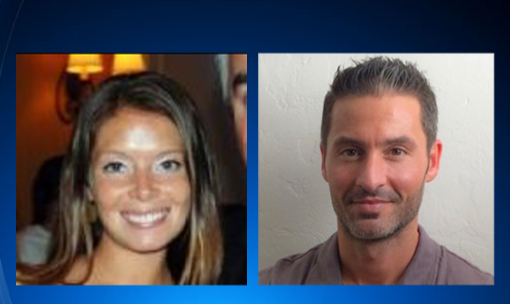 CORAL GABLES, Fla. -- The man who shot and killed two managers at a Florida gym before turning the gun on himself had just been fired from the fitness center for workplace violence, police said Sunday.

“He didn’t go inside of where everyone was training,” said a woman who was at the juice bar with her husband. “He went to the back door, where the staff and manager office are.”

Marc Sarnoff, who previously trained with Wilson for two years, saw him at the gym before Saturday’s shooting and noticed something was wrong. Wilson typically was “very buttoned up, very proper, very appropriate,” Sarnoff said in a phone interview. But on Saturday, Wilson physically bumped into Sarnoff and his current trainer. The usually adept Wilson seemed noticeably off-kilter.

“He wasn’t clean-shaven ... and he seemed to be slurring his words,” said Sarnoff. “He said, ‘I’m sorry I’m just off balance this morning.’”

The shooting happened about 1 p.m. Saturday at the upscale Shops at Merrick Park, which is a few miles from the University of Miami campus. Shoppers, diners at mall restaurants and people in workout gear ran to safety or took cover after reports of gunfire.

“Five gunshots,” Ovi Viera, who was in the men’s locker room, told The Miami Herald. “It was too loud for it to have been a weight dropping. Within two seconds, people just started running out.”

The commotion got the attention of a Coral Gables officer, who ran into the gym, CBS Miami reports. Sources said Wilson saw the officer, ran into a bathroom and shot himself.

Management at The Shops at Merrick Park activated their alert system and the mall was evacuated. Some were sheltered inside stores and the entire mall was shut down for hours.

Wilson trained Eveliny Bastos-Klein shortly before Saturday’s shooting. She told The Miami Herald that he didn’t seem distracted and that she didn’t notice anything unusual during their session.

An Instagram account in his name is filled with shirtless, muscly photos talking about body building competitions that he was preparing for. In December, a posting said he had gotten a blue belt in martial arts.

Ackerman, one of the victims, studied on a field hockey scholarship at Florida International University. University Vice Provost Steve Moll, who taught Ackerman while she was working on a master’s degree in hospitality, described her as “the whole package.”

“She was smart, she was athletic, she was charming, she was determined,” he said in a phone interview.

He said she was a hard worker who shined at everything she set her mind to. The New Jersey native was once chosen out of more than 1,000 students as the student leader for the prestigious South Beach Wine & Food Festival and later went to work at the Fontainebleau hotel, he added.

She’d been promoted to general manager of the upscale gym in August.

“My initial reaction was, ‘No, this can’t be. Why would anybody want to hurt such a lovely person’,” he said.

Friends and colleagues described Hortis as a beloved spinning instructor with a generous spirit and warm demeanor. A photo of Hortis clad in black workout clothes, sitting on a bike while leading a class circulated online.