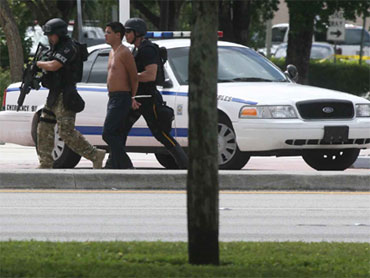 Bank robbers pulled off a dramatic heist Friday, strapping a suspected bomb to a teller and ordering him to steal as much money as he could grab from the vault - all while his father was being held hostage.

It began when the three masked, gun-toting thieves burst into the teller's apartment shortly after midnight.

The men held the teller and his father hostage in the suburban Kendall apartment for seven hours, waiting for morning when the teller usually helped open his Bank of America branch near the University of Miami campus, according to the FBI and local police. One suspect stayed with the father, while the other two and the teller left for the bank in the teller's red 1998 Ford Mustang.

Strapped to the teller's body was a device the robbers said was a bomb.

Once at the bank around 8 a.m., the thieves sent the teller inside.

"They said, 'We have a triggering device. Get as much money as you can and bring it out to us,"' Coral Gables Police Chief Richard Naue told reporters.

Also inside the bank was the female branch manager, the FBI said. After the teller took an undisclosed amount of cash, the robbers took off in his car and the manager called police.

That triggered a huge response of heavily armed police and shut down traffic on a segment of U.S. 1, a major Miami thoroughfare, leading as well to lockdowns at several nearby schools. Authorities initially feared there may have been hostages inside the bank.

Shortly before noon, after police bomb robots had been sent inside, the possible bomb was removed and the shirtless teller was led out of the bank. Neither the teller nor his father was injured.

The robbers never entered the bank, apparently relying on the teller's fear of a possible explosion and the potential danger to his father to ensure he would do their bidding inside.

The FBI questioned the teller, Diego Uscamayta, but he was cleared and released from custody late Friday.

"It is an unusual event to have explosives strapped to a victim and sent in," said Dena Choucair, assistant special agent in charge of the FBI's Miami field office.

She said there were bomb-making materials in the device, though she said she could not reveal what they were.

The FBI and Miami-Dade Police Department's bomb squad were examining the device to determine if it was a working bomb or a fake.

There was no immediate sign of the suspects. Police were still searching late Friday afternoon for the teller's red Mustang, which had the Florida license tag R958DY.

Bank of America said in a statement that "the safety of our associates is our highest priority and Bank of America is working closely with law enforcement to assist in the situation."