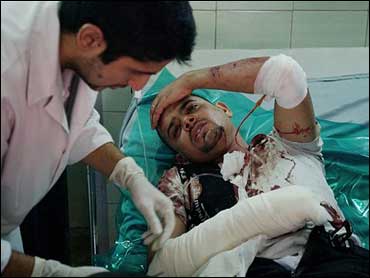 A top Algerian diplomat who preferred traveling without bodyguards to highlight his country's good relations with Iraqis was dragged from his car by gunmen and abducted along with a colleague and his driver, Iraqi officials said.

Meanwhile, efforts to draft a new constitution by an Aug. 15 deadline suffered a setback Thursday when Sunni Arab committee members announced they would not participate until the government accepts demands that one Shiite official said are impossible to meet.

Thursday's kidnappings brought to five the number of key diplomats from Islamic countries targeted in Baghdad in less than three weeks in an attempt to undermine the U.S.-supported Iraqi government.

The top Egyptian envoy was reportedly killed after being kidnapped July 2 after stopping to buy a newspaper in west Baghdad, also without security. A few days later, kidnap attempts against two other Muslim diplomats failed.

The chief of Algeria's mission in Iraq, charge d'affaires Ali Belaroussi, 62, and another Algerian diplomat, Azzedine Belkadi, 47, were abducted along with their driver in west Baghdad's upscale Mansour district, police and Algerian officials said.

A career diplomat and father of four, Belaroussi has been in Iraq for about two years. He had previously served as financial director at Algeria's embassy in Paris from 1997 to 2002, Algerian officials said.

Prime Minister Ibrahim al-Jaafari pledged to increase security for diplomats but warned them to avoid going to dangerous areas. The Mansour district has been the site of a number of kidnappings, including that of Americans Jack Hensley and Eugene Armstrong and Briton Kenneth Bigley. All three were later killed.

Deputy Interior Minister Ahmed Al-Khafaji told Al-Jazeera television that the Algerian envoy had refused Iraqi offers to provide him with bodyguards, saying he didn't need protection because "Algeria's relationship with the Iraqis is good."

Egyptian diplomat Ihab al-Sherif was seized at gunpoint in another western Baghdad neighborhood. Three days later, gunmen opened fire on senior envoys from Pakistan and Bahrain in separate incidents as they were traveling in west Baghdad. Police said the incidents were kidnap attempts.

Al Qaeda's wing in Iraq, the country's most feared terror group, claimed responsibility in Web statements for kidnapping al-Sherif and later claimed to have killed him.

The militants want to seize "as many ambassadors as we can" to punish governments that support Iraq's Shiite-dominated and U.S-supported government, according to an Internet statement attributed to the group, led by Jordanian Abu Musab al-Zarqawi.

A total of 49 countries or entities have some form of diplomatic representation in Iraq, including 18 Arab or non-Arab Muslim countries, according to Iraq's Foreign Ministry and country Web sites.

The new constitution is considered crucial to putting together a broad-based government so the United States and its international partners can begin scaling back their military presence in Iraq next year.

Sunni Arab members of a constitutional committee decided to boycott the process after two Sunnis helping to draft the charter were gunned down Tuesday.

They demanded the government provide them with security and arrange an international inquiry into the killings. They also asked that Sunnis have a greater voice in drafting the charter, said Kamal Hamdoun, one of the 12 remaining Sunni committee members.

A Sunni Arab role is considered essential in luring members of the influential minority away from the Sunni-dominated insurgency.

A Shiite member of the constitutional commission, Hussein Athab, complained the Sunni statement would make it more difficult to finish the constitution on time. The demands "are impossible to be met and no one can accept them," Athab said.