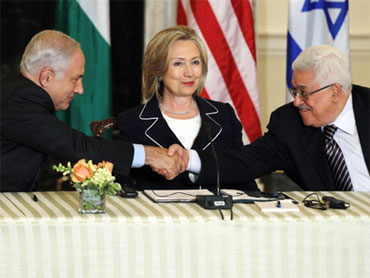 Palestinian President Mahmoud Abbas said he has asked the U.S. to settle a dispute with Israel over settlement expansion that is threatening to derail Mideast peace talks.

Israel's 10-month partial freeze on new construction in West Bank settlements ends Sept. 26, and Israeli officials have indicated they will not extend the freeze as is. Abbas has said he'll quit peace talks with Israel unless the restrictions remain in place.

Abbas said late Monday that he has asked the U.S. "to intervene in the settlement issue."

The Obama administration has promised an active role in the talks, Abbas told reporters accompanying him on his way back from Washington, where direct negotiations were launched last week after a hiatus of nearly two years.

"The U.S. will be present at the negotiations, not necessarily behind closed doors, but (U.S. mediators) can be inside the room, or outside," Abbas said.

Settlements take up land the Palestinians want for a state, and Abbas views Israeli Prime Minister Benjamin Netanyahu's decision on the freeze as a test of his intentions.

President Barack Obama wants Abbas and Netanyahu to agree on the main principles of a peace deal within a year, but gaps remain wide. In Washington, Netanyahu - who long opposed Palestinian statehood before accepting the idea last year - struck a conciliatory tone, but the Palestinians still fear the Israeli leader plans to use the talks to buy time and establish more facts on the ground.

"Some say he is not serious and practicing PR," Palestinian negotiator Nabil Shaath told reporters on Tuesday, referring to Netanyahu. "But we are going to test him on two imminent issues - the settlement slowdown and then at the negotiating table."

President Barack Obama wants to see both sides reaching agreement on the main elements of a peace deal within a year. But in a message to the Israeli people on Tuesday ahead of the upcoming Jewish New Year, Netanyahu said the negotiations' success, while desired, "was not assured."

Abbas and Netanyahu will meet twice next week, first in the Egyptian resort of Sharm el-Sheik and then in Jerusalem. U.S. Secretary of State Hillary Rodham Clinton will attend both meetings.

The Israelis are negotiating with Abbas, who has limited governing power in the West Bank under Israel's overall security control. The Gaza Strip, located on the other side of Israel, is controlled by Abbas' rivals, the Islamic militants of Hamas, who do not recognize Israel and reject negotiations. Clashes and rocket fire are common along the Gaza-Israel border.

On Tuesday, Palestinian militants in Gaza fired a rocket into Israel. No one was hurt.