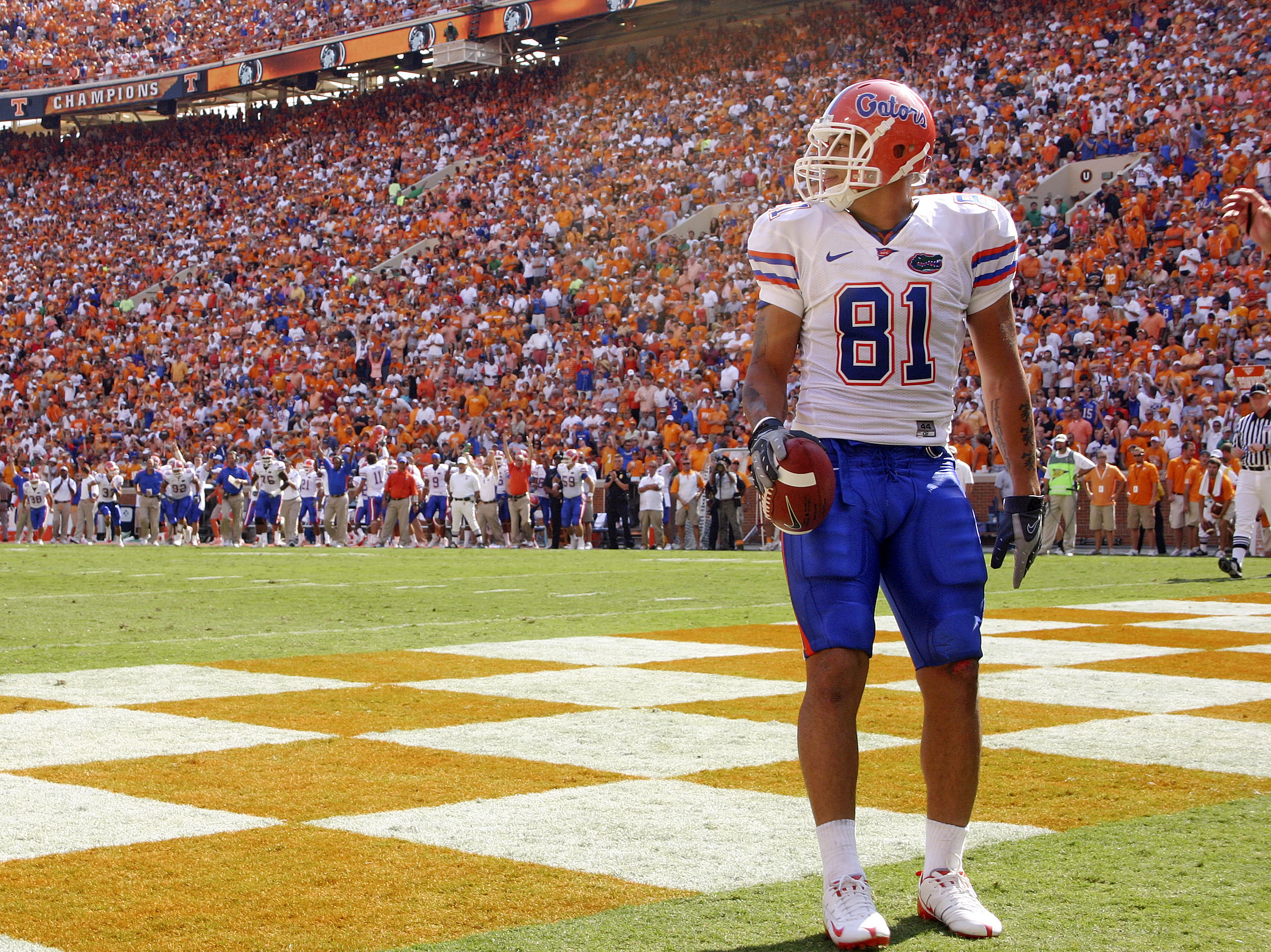 GAINESVILLE, Fla. - Ex-University of Florida and New England Patriots star Aaron Hernandez, jailed while awaiting trial in the killing of three men, is "Mr. July" in the Gators' 2014 sports calendar and is also seen in a photo carrying a football in a Patriots calendar by the same company.

The school said Tuesday that officials approved the publication months before he was charged with murder in June 2013, and the Patriots said they would not comment on matters involving Hernandez.

The calendars are still available for sale through Target.com and feature tight end No. 81 in the Gators' white jersey and blue pants with an orange stripe carrying the football under his right arm and almost looking into the camera. It includes his height, weight and hometown of Bristol, Connecticut.

In the Patriots calendar, Hernandez is seen holding the ball in red-gloved hands and wearing a dark blue jersey, silver pants and high socks. It's hard to tell from the Target ad in which month he is featured. It has the NFL and NFL Players Association logos on the back.

After the 2012 season, on June 26, 2013, Hernandez was arrested in the slaying of semi-pro football player Odin Lloyd, whose body was found in an industrial park about a half-mile from Hernandez's mansion in North Attleborough, Massachusetts. Hernandez faces a murder trial starting Oct. 6. Others also face charges in the case.

Since then, the 24-year-old Hernandez has also been indicted on two counts of first-degree murder in the drive-by shooting of two other men, Daniel de Abreu and Safiro Furtado and faces trial next year in that case. He has pleaded not guilty to all of the charges, and is in jail in Massachusetts.

Apple said the calendar was not produced by the university, but a third party. Since it's already been printed and distributed for sale, there's not much the school can do, Apple said.

"There are thousands of Gator products in the pipeline for approval at any given time and it's not common practice to re-review them once they have already been approved. We have since notified the licensee that it is no longer approved," he said.

He added that the school just became aware of the situation on Monday.

Apple says the school advised the calendar's maker that Florida no longer approves of the product, but that those already printed will not be recalled.

The calendar was first reported on Deadspin.com, and the official Florida Gators football Twitter feed responded, also saying the calendar was approved before Hernandez's legal troubles were widely known.

How a man's beheading 50 years ago led France to end the death penalty
Thanks for reading CBS NEWS.
Create your free account or log in
for more features.
View CBS News In
CBS News App Open
Chrome Safari Continue
Be the first to know
Get browser notifications for breaking news, live events, and exclusive reporting.