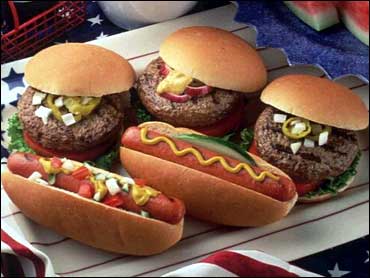 Health advocates have begun waging war against fat with a plan that would downsize your wallet every time you supersize those fries.

In a campaign modeled after the war on tobacco, CBS News correspondent John Roberts reports, officials at a conference in Washington, D.C., last week advocated penalties for fatty and sugary foods, incentives for exercise and free distribution of fruits and vegetables.

The statistics are staggering: 65 percent of Americans are overweight. Nearly one-third are classified as obese, meaning they carry 30 pounds
or more than they should.

In fact, America's fast-food, sugar-fueled society is one of the most overweight in the world.

"The government spends about $3 million a year on its five-a-day campaign to promote fruit and vegetable consumption, says Michael Jacobson, one of the health advocates at the conference. "Three million a year. McDonald's, one company, spends $1 billion a year encouraging people to eat hamburgers, fries and Cokes."

That's why doctors and nutritionists want to declare war on what they say is the promotion of poor eating habits that supersize such health problems as diabetes, heart disease and cancer.

Advocates want a "Twinkie Tax," a levy on sugared and fattening foods, and no-cost health offerings like free vegetables in company cafeterias. Also planned is a public awareness campaign to get people off the couch and into an exercise routine.

But, like the tobacco campaign, this is likely going to take decades to win. Anti-smoking forces worked for 30 years to get laws passed prohibiting smoking in offices and restaurants passed and cigarettes taxed almost to the point of being unaffordable.

But that has led to a decrease in smoking. The number of men who smoke has been cut in half; the number of women is down by 25 percent.

Jacobson argues that a similar push, incorporating education, physical activity and penalties against junk food would reduce the number of overweight Americans and cut deaths.

"I think it would be very interesting to have a television commercial showing just how much fat there is in a typical serving of Haagen-Dazs ice cream," says Jacobson.

In fact, an ad that ran in West Virginia for six weeks did just that showing the artery-clogging fat of whole milk. And sales of skim milk soared.

A campaign against junk food would face the same, stiff opposition from a multi-billion dollar industry that marked the tobacco wars.

But it would be far more complicated that just telling people not to smoke. People have to eat and that means learning about the right foods to eat.

Advocates argue that just a one-cent tax on soda could raise a whopping $1.5 billion each year in revenue, which could be used to finance health education and fitness facilities.

When Texting Becomes an Addiction