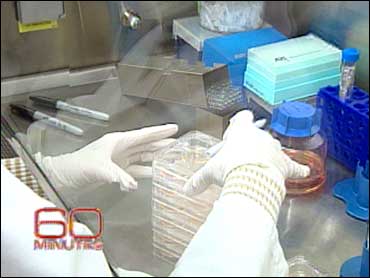 One of 10 couples in the United States is infertile, and more and more of them are seeking help through in vitro fertilization. In that process, eggs extracted from the woman are fertilized with the man's sperm in a Petri dish and the resulting embryos are implanted back into the woman.

More embryos than are needed are often created and, as correspondent Lesley Stahl reports, it's these surplus embryos that are at the center of a huge controversy because they contain very special stem cells that scientists believe are extraordinary, and have great promise of one day curing a range of diseases.

Caught in the middle of the controversy are couples like Kai Madsen and his wife Pam, who runs an advocacy group for infertile couples.

The Madsen's personal story began with their having a heck of time getting pregnant.

Asked what the programs do, Pam explains: "They want to make many eggs. They want … many embryos."

"The best chances … of creating healthy embryos for implantation later," her husband adds.

With the medication regimen she was on, Pam made 27 eggs. "I was a regular chicken," she jokes.

Like most couples who go through fertility treatments, the Madsens ended up with excess embryos. They have four that have been frozen ever since the birth of their second son, 13 years ago.

Did they think they would have to decide about what to do with those excess embryos?

"No. When you go through this process, your expectations are not really very high," says Kai.

Pam adds that most people going through the process are skeptical they will have a baby and that a surplus of embryos is not something you think about at the time.

There are thousands upon thousands of couples like the Madsens. In fact, there are 400,000 frozen embryos in storage in fertility clinics across the country.

"In each, there will be one cane for each patient that will hold all of the embryos that they have frozen," Scott explains.

It can cost a couple up to $2,000 a year to store their excess embryos, which are frozen at 321 degrees below zero. It's been suggested that fertility clinics should stop making so many embryos that go unused.

"You're really limiting, then, the number of eggs that you can inseminate," Scott says. "Then you're actively intervening to harm that couple and reduce their chances of ever having a baby. I have a very big ethical problem with that."

Scott cultures as many as 12 embryos per couple, implants two to four and freezes the rest for use, should the first attempt fail. That, he says, cuts down on the expense and emotional toll.

Many of the couples are now in the position the Madsens are in: of deciding the fate of their surplus embryos.

The Madsens say there are five options.

Donating them to medical research, meaning stem-cell research, wasn't an option before 1998 when professor James Thomson, a biologist at the University of Wisconsin, first culled a stem-cell line from a human embryo.

And this is what started the whole controversy, Thomson acknowledges.

"That's the first cell line, yeah," he says, as he looks through a microscope.

The reason embryonic stem cells are so prized is because they have the unique ability to grow into all different kinds of cells in the body, like kidney cells, brain cells and even heart cells.

He showed 60 Minutes stem cells that had been transformed into human heart cells.

"You can see that they actually function like individual heart muscles. They actually contract," Thomson explains. "These would be like a millimeter across."

And the cells beat.

The hope is that, one day, healthy stems cells like these will replace diseased cells in the body. But Thomson says to move the science forward, researchers need more embryos.

"It's gonna help people, and we don't have a good crystal ball exactly how," he says. "But there's very rarely this amount of enthusiasm in science for something."

What is holding things up is President Bush's policy: he has banned the use of federal money for work on any embryonic stem cells created after August 2001. Extracting stem cells destroys embryos, which he opposes — a point he highlighted in his 2006 State of the Union speech.

"Human life is a gift from our Creator and that gift should never be discarded, devalued or put up for sale," the president said.

The president, who promotes something known as the "adoption option," met last year with a group of parents and their children who owe their lives to couples who bequeathed them their leftover frozen embryos.

Millions of federal dollars now go to programs that promote the "adoption option," like the National Embryo Donation Center in Knoxville, Tenn.

Deliveries here are not made by the stork, but by FedEx. Batches of frozen embryos are flown in from couples across the country. But the number of so-called adoptions through programs like this one totals only about 100.

"We need to do a better job of encouraging people to adopt," says Robert George, a professor at Princeton University and a member of President Bush's Council on Bioethics.

George concedes there are many more frozen embryos than will ever be donated to other couples.

"If we cannot encourage more parents to permit the embryos to be adopted, we're going to be stuck," he says. "And the reality will be that those embryos remain in cryo-preservation indefinitely."

But leaving embryos frozen in perpetuity, he says, is morally preferable to destroying them for stem cell research. To Art Caplan, a bioethicist at the University of Pennsylvania, that makes no sense.

"You got people in wheelchairs. You got people trying to understand how to cure cancer," Caplan says. "You know, people who want to understand genetic diseases and you have embryos frozen that no one will ever use for any purpose whatsoever. There's a moral equation here, too. And it seems to be to lead toward research, not just perpetual freezing."

He recently did a survey of the nation's fertility clinics and found that excess embryos are not only frozen, but many — thousands a year — are routinely destroyed with the patients' consent.

"Some patients ultimately will finish their family, have, maybe they have a couple of embryos in storage. They do decide to discard those. That's their decision," Scott says.

"Well, when President Bush says he opposes using embryos for stem-cell research because that would be destroying an embryo, what does it mean that embryos are already being destroyed?" Stahl asks Caplan.

"To me, it means that the president's policy is hypocritical and deceptive," he replies. "And I say that deliberately because it is not a secret that embryos are destroyed at infertility clinics."

"So we have a policy that says, 'Can't destroy them for research. I, as president, cannot abide it.' Every day a clinic somewhere, destroys one — no one says anything," Caplan adds.

Asked why the embryos slated for destruction shouldn't be made available for research, George says, "The principle that the president laid down and which I support is one that says all human beings, irrespective of age or size or stage of development or condition of dependency, possess the same human dignity, because human dignity is inherent."

"Are you equating these embryos, these frozen embryos, with a full-grown man or woman?" Stahl asks.

"And you're equating them?" Stahl asks.

"Oh, sure," George says. "Yeah, I'm equating them in terms of human dignity."

What does he mean by "dignity"?

"I mean, shouldn't simply be thrown out in the trash. Should be treated respectfully, the way we treat the remains of human beings at later stages of development," George explains.

"You're saying, take these little bunches of cells, and have burials for them?" Stahl asks.

"Well, if the president thinks that these are human beings, why is there no policy or proposal against this discarding into the trash bin?" Stahl asks. "I don't see politicians flocking to regulate fertility clinics."

Asked why, he says: "Well, I think politicians are afraid to touch the issue of fertility, because they fear that it's the true third rail of American politics, maybe a more dangerous issue even than Social Security. Politicians do fear the potential political backlash of trying to regulate the industry."

Art Caplan says no matter what the politicians do, thousands and thousands of the excess embryos will end up being destroyed anyway.

But some people argue these embryos are life.

"Well some people say they're life, and my response is: you can slowly destroy them or you can destroy them in a quicker way," Caplan says. "But to say that their fate is anything other than destruction is a delusion, and everybody knows it. There's no escaping it. Once you realize there are 400,000 frozen embryos, some of which are in bad shape, some of which have been there a long time, you can give all the life speeches you want, they're not going anywhere. And if you want to feel good about it and say, 'Well, they're frozen,' then it's like saying 'No one will die in America, cause we have cryogenics. We'll freeze everybody's body and then death won't happen.' "

After agonizing for 13 years, the Madsens finally made their decision: their four embryos are going to stem-cell research. But George doesn't think couples like the Madsen's should even have the right to make that decision.

"This is a decision that we as a community have to make. It can't be left to individual choice to decide," he says.

"Why not? Why not leave it to individual choice when it comes to an embryo? Why isn't that a religious decision for the couples to make?" Stahl asks.