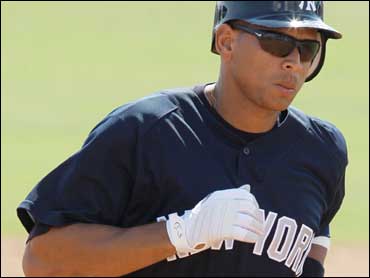 Alex Rodriguez will have arthroscopic hip surgery Monday and is expected to miss six to nine weeks. The Yankees slugger will need further surgery after the season.

The diagnosis by Dr. Marc Philippon on Sunday was yet another jolt to Rodriguez during a tumultuous month in which the three-time AL MVP admitted using steroids from 2001-03 while with Texas.

Philippon spoke from Vail, Colo., on a conference call with Yankees general manager Brian Cashman. Philippon, a noted hip specialist, will perform the procedure. Also on the call was team physician Chris Ahmad.

The decision eliminates the option of Rodriguez treating the injury with rest and rehab and playing through the season without surgery. This operation will not completely correct the hip. More aggressive surgery would have sidelined Rodriguez three to four months.

"The surgery that will just repair the labrum tear right now would shorten his rehab," Cashman said. "Then following the conclusion of the season going in and repair the remaining aspects that need to be repaired."

Rodriguez has a torn labrum and a cyst in his right hip. The cyst was drained Wednesday, and he had additional tests Friday to test the hip's strength and flexibility.

His hip had been fine until he experienced stiffness during spring training this year. The injury forced the 12-time All-Star to skip the World Baseball Classic, where he was to play for the Dominican Republic.

Philippon attributed the labrum tear to the rotational stress that Rodriguez - "a very strong hitter, strong batter" - places on his hip.

"Because of all the test findings, analysis, the function of Alex, I feel it's in his best interest to have his labrum repaired, remove part of his impingement and therefore stabilize his labrum," he said. "The goal here is to allow Alex to rehab rapidly in a safe manner."

The leading candidate from the organization to take over at third base would be Cody Ransom, a 33-year-old who has a .251 average and 24 RBIs in 183 at-bats in six major league seasons.

Last year, Rodriguez was sidelined from April 28 to May 20 because of a strained right quadriceps - his fifth career trip to the disabled list. An MRI exam at that time showed what Cashman called an "irregularity" in the right hip.

Rodriguez's 138 games last season were his fewest since 1999, when he tore cartilage in his left knee during a spring training agility drill March 30. He played in the first two games of that season with Seattle, then was put on the disabled list April 7 and missed 32 games until he returned May 14.

Since joining the Yankees before the 2004 season, Rodriguez has averaged 42 homers and 123 RBIs to go with a .303 average.
By Mark Didtler For The Associated Press