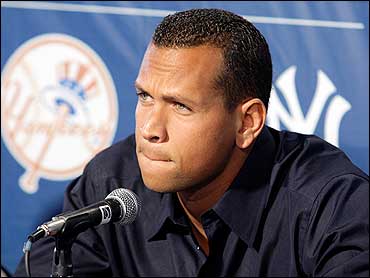 Alex Rodriguez answered one big question Tuesday, admitting his cousin repeatedly injected him with a substance from the Dominican Republic.

The New York Yankees star blamed his 2003 positive test on being young and naive.

"I knew we weren't taking Tic Tacs," said Rodriguez, who was joined at the head table by Yankees general manager Brian Cashman and manager Joe Girardi.

Before a horde of reporters at Steinbrenner Field, Rodriguez began by reading a statement in which he again apologized for taking banned drugs from 2001-2003 while he was with the Texas Rangers.

Then Rodriguez turned to his teammates and searched for the right words.

It took 37 seconds - a break in which he looked side to side, blinked several times, bit his lip and took a sip of water - then finally looked up and faced Derek Jeter & Co.

Rodriguez said his cousin introduced him to "boli," saying it was an over-the-counter substance in the Dominican. While with Texas, he said his cousin injected him about twice a month during six-month cycles to get an energy boost.

"I didn't think they were steroids," he said. "That's again part of being young and stupid. It was over the counter. It was pretty simple."

"All these years I never thought I did anything wrong."

But Rodriguez couldn't say why he was so secretive about the steroid use if he didn't think it was wrong. His only response - "That's a good question - was typified the tightly-controlled news conference that was long on hope and remorse but consistently short on details, reports CBS News chief investigative correspondent Armen Keteyian.

Rodriguez acknowledged reaching out to CBS News anchor Katie Couric to apologize for lying to her during a 2007 60 Minutes interview.

He said he wasn't sure how the drug use helped him, but admitted he had more energy.

Rodriguez said he has not used human growth hormone or any other banned drug since then. He refused to identify his cousin.

The three-time AL MVP and baseball's highest-paid player spoke at the Yankees' spring training camp 10 days after Sports Illustrated reported that he tested positive in 2003.

"He's a huge investment. So he's an asset, and this is an asset that's currently in crisis," general manager Brian Cashman said. "So we will do everything we can to protect that asset. ... If this is Humpty Dumpty, we've got to put him back together again, to get back up on the wall."

In an interview last week with ESPN, Rodriguez blamed the pressures of his $250 million contract with Texas for his decision to use performance-enhancing drugs.

"I thought I knew everything, and I clearly didn't," Rodriguez said in his statement. "Like everyone else, I've made a lot of mistakes in my life. The only way I know how to handle it is to move forward.

"One thing I know: Baseball is a lot bigger than Alex Rodriguez."

For years, Rodriguez denied using performance-enhancing drugs. But SI reported he was on a list of 104 players who tested positive during baseball's 2003 survey. SI identified the drugs causing the positive test as Primobolan and testosterone.

"We consulted no one and had no good reason to base that decision," he said. "It was pretty evident that we didn't know what we're doing."

Tuesday, Rodriguez knew exactly what he had to do - offer a public apology to his teammates, forced front and center once again in the steroids scandal.

Sitting in the front row were Jeter, Andy Pettitte, Mariano Rivera and Jorge Posada. Jeter, with his arms crossed, and the other three stared right back at Rodriguez as he apologized directly to them.

None of the players would discuss Rodriguez's latest confession.

"I'm here to take my medicine," Rodriguez said Tuesday. "One thing I will say after today I hope to focus on baseball. We have a very special team here."

Asked whether his stats during those years should count, he said it wasn't for him to decide.

The 33-year-old Rodriguez has hit 553 home runs and is expected by many to break Barry Bonds' record of 762.

The drug-related apology has become a near-annual February rite for the Yankees.

Jason Giambi gave an ambiguous one at Yankee Stadium on the eve of spring training in 2005.

Pettitte gave an emotional and lengthy one when he arrived at spring training last year.

That confessional lasted 55 minutes. Rodriguez's on Tuesday was far shorter, lasting about 32 minutes before it was cut off. No follow-up questions were permitted.

The survey was to remain anonymous, but federal agents seized the records and samples from baseball's contractors in April 2004 during raids in connection with the BALCO probe in San Francisco. Although the agents originally had search warrants for the records of 10 players, they discovered the broader records and came back with additional search warrants.

The list of players is under seal, but those seizures remain in dispute. The 9th U.S. Circuit Court of Appeals currently considering the government's appeal to overturn lower-court decisions in favor of the union.