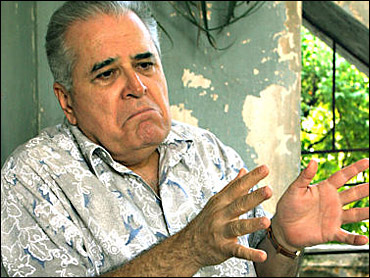 In a 22-to-21 vote with 10 abstentions, the U.N. Human Rights Commission in Geneva "deplores the events which occurred last year in Cuba", a reference to the trials and sentencing of 75 dissidents to long prison terms on charges of working for a foreign government — Cuba's arch enemy, the United States.

It was a vote welcomed by dissidents on the island, including long-time rights activist Elizardo Sanchez Santa Cruz, head of the illegal, but tolerated, Cuban Commission on Human Rights and National Reconciliation.

"It's always important that a resolution be approved calling attention to the situation in Cuba," he told CBS News. "But in practical terms, there are very little results because the Cuban Government continues to totally underrate the calls of the international community."

Within an hour of the vote, Cuba's Foreign Minister, Felipe Perez Roque, denounced the outcome as "a true failure for the United States ... a ridiculous result that can never be presented as a condemnation of Cuba."

Perez Roque told a press conference in Havana, it was "a pyrrhic victory after all the effort and spending the U.S. invested in it," including the personal involvement of President Bush and Secretary of State Colin Powell. He accused Washington of putting heavy pressure on the countries of Latin America — especially Honduras, the nation that presented the resolution.

All of the commission's Latin American members lined up behind the resolution with the exception of Argentina, Brazil and Paraguay, who abstained. None of the African countries supported it.

On the eve of the balloting, Miriam Leiva, wife of one of the 75 jailed dissidents, said that despite her pessimism, she still hopes the resolution will have an impact.

"The most important thing is for him [Fidel Castro] to reconsider his position, to listen to the international community…and grant freedom to these people because they haven't committed any crime…," she said.

The resolution also urges Cuba to "accept a visit by an international monitor" and "refrain from adopting measures which could jeopardize the fundamental rights, the freedom of expression and the right to due process of its citizens."

But Perez Roque insisted the only purpose of the resolution was to "manipulate the issue and keep it on the agenda."

"There should not have been any resolution presented on Cuba," he declared. "We will not allow the special monitor called for in the resolution to come here. We will, however, continue to cooperate, as we have in the past, with the U.N. system in the area of human rights. We will not be singled out for special treatment."

Cuba has long charged that the island is scrutinized by the commission only because of a U.S. political vendetta against Castro.

And Havana countered the resolution by presenting one of its own on the question of "Arbitrary Detentions in the Area of the U.S. Naval Base in Guantanamo."

It calls for clarification of "the living conditions and legal status" of the persons being held there and "the steps taken to secure respect for their human rights and fundamental freedoms."

Perez Roque told the media Cuba would approach all the countries that supported the resolution on Cuba to see if they are also willing to sponsor one that implies examining U.S. human rights practices.

Portia Siegelbaum has been the CBS News producer in Havana since February. She has covered the story of Cuba for more than 10 years. During that time, she worked on a number of documentaries on Cuba for Discovery and the BBC.
View CBS News In