"I have nothing to offer but blood, toil, tears and sweat."

He was one of the towering figures of the 20th century.

"Out of the depths of sorrow and of sacrifice. We'll be born again the glory of mankind."

Few men have changed the course of history like Winston Churchill did, and few have done it with such eloquence.

He had a passion for words,

"What kind of a people do they think we are?"

And for those looking to explore that passion, there's a small bookshop in New York City that specializes in Churchill's work, Chartwell Booksellers.

Barry Singer, who opened the shop in 1983, said he wasn't a big Churchill buff.

"The idea to name the store Chartwell and to have it here was actually the idea of the man who built this building," Singer told Osgood.

Tucked neatly into the lobby of a Park Avenue skyscraper, Chartwell - named after Churchill's home in Kent - sells rare pieces of his work, and nearly everything written about him.

"There are 44 books by Winston Churchill, which include all the speech compilations," he said. "So he wrote probably more than any political figure ever has. And there's probably more about him except, perhaps, Napoleon."

Chartwell carried only a handful of Churchill books until wealthy bankers in the building began asking for his writings.

"A corporate raider of the '80s named Saul Steinberg, who was quite legendary in his day, his secretary called down and she said, 'Mr. Steinberg will take those books. Would you please get him everything Churchill wrote in first edition and have it bound in leather?' Singer recalled. "And I said, 'Would you like an estimate of what that might run and how long it might take?' And she said, 'No, just do it as soon as possible.'"

It was a book order that would change his life.

"This gave me the dispensation to go to England and to begin to buy books on Churchill in earnest," Singer said. "I built a beautiful collection for him. But I also discovered while I was there that, although every bookstore in the country seemed to have a shelf on Churchill, no bookstore specialized in Churchill, oddly enough. So, I found my niche."

Through the years, other figures with their own place in history have turned to the shop for Churchill's work. British prime minister Gordon Brown gave a biography from Chartwell to President Obama. The Churchill grandchildren regularly come by to appreciate the man they called Winnie.

Churchill wrote not only because he loved to, but also because he had to.

"Churchill wrote to make a living," said Singer. "He was a writer first and foremost. And his Nobel Prize was for literature, not for as, like you would think, a peace prize. It was for his writing. It was for 'The Second World War' (Houghton Mifflin). He used the language magnificently."

It was Churchill who first used the expression "Iron Curtain."

"From Stettin in the Baltic to Trieste in the Adriatic an iron curtain has descended across the Continent."

When it came to delivering one of his powerful speeches, Singer says Churchill, who wrote every word, had a trick:

"He wrote out his speeches, not according to grammatical punctuation, but in the cadences that he intended to deliver them with. His spontaneity was very prepared as a speechwriter. He was a very professional speaker. He knew what he wanted to do." 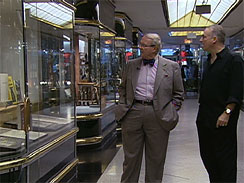 (CBS)
Singer showed Osgood some of his rare materials - "Extremely valuable, and growing more valuable all the time" - including the first editorial of "My Early Life," which came out in 1930. "It's a rather beat-up copy," Singer said. "We built this beautiful case to preserve it, because it is inscribed 'To Diana, from Papa, October 25, 1930.' Diana was Churchill's daughter, his oldest daughter. This is a very special book."

For the record, Princess Diana Spencer and Winston Spencer Churchill were distant cousins.

Singer has collected at least one first edition of every book Churchill wrote, many selling for thousands of dollars.

Singer showed Osgood what is perhaps the rarest:

"In the early years of the century, Churchill was a young M.P., he was still in his 20s," Singer said. "And it's still debatable how this came to be printed, whether Churchill actually paid to have it produced, possibly. But it was done very cheaply. Some of his speeches were collected on a very particular subject, for free trade. So far as we can tell, no more than eight to ten copies of this book exist in the world, most of them in private collections."

While writing was Churchill's first love, he was a man of many hobbies.

"He dearly loved painting," said Singer. "It was his method of relaxation. He painted hundreds and hundreds of canvases. And he never sold a painting, by choice. He only gave them away or kept them."

"And he was a bricklayer, too," Osgood said.

"Bricklaying was one of his hobbies. Painting was the other."

"Somehow you don't think of Churchill as somebody who liked to work with his hands in that way."

And regardless of how Churchill spent his time, he always did so with style.

"He had a sense of fashion," Osgood said.

"He liked to be seen in the vest and that tie you're wearing, he loved that bow tie. Did he give that to you?" Singer laughed.

"Actually when I saw this tie in a catalogue, I said, 'That looks like Winston Churchill,'" Osgood said.

He was a larger-than-life personality, with a pen to match. As Edward R. Murrow once said, he mobilized the English language and sent it into battle.

"Let us therefore brace ourselves to our duties, and so bear ourselves, that if the British Empire and its Commonwealth last for a thousand years, men will still say, 'This was their finest hour.'"

Forty-five years after his death, people still hang onto his every word.

For more info:
Chartwell Booksellers
The Churchill Centre and Museum