You've seen him assaulted with a shoe, but care to see President Bush "hung?" That's a scenario Mr. Bush decided was worthy of a joke this morning in Washington.

"I suspected there would be a good-size crowd once the word got out about my hanging," the president said at the unveiling of his portrait at the National Portrait Gallery. The portrait by Robert Anderson – a classmate of Mr. Bush at Yale – will be hung in the exhibition "America's Presidents," and is available for viewing starting tomorrow. 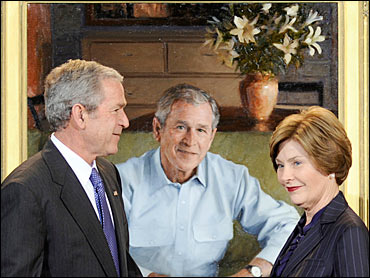 CBS News White House correspondent Mark Knoller writes: "Since the gallery now has portraits dating back to George Washington, he noted the symmetry - from George W. to George W."

Mr. Bush also noted that the artist said he had a lot of trouble with the president's mouth. "And I told him that makes two of us," Mr. Bush said.

One more crack: President Bush said the artist had to use alot more gray paint that in a previous portrait of a slightly younger Mr. Bush for the Yale Club.

First Lady Laura Bush's portrait, by Aleksander Titovets, a Russian painter who now lives in El Paso, Texas. The portrait of Mrs. Bush won't hang near her husband's – it will be on display on the first floor in the north hall of the gallery.

Despite being allotted less desirable portrait real-estate, Mrs. Bush was all smiles and joviality, too. According to the official transcript of the unveiling, she said:

Sasha [Titovets, the Russian painter] said that he postponed telling his mother when his work was chosen for this portrait. He thought the news might be "too big" for her. (Laughter.) And history shows us that these assignments can sometime turn out poorly. Years ago, Peter Hurd was commissioned to paint Lyndon B. Johnson's portrait for the official White House collection. President Johnson took one look at the final portrait and declared it the "ugliest thing he'd ever seen." (Laughter.) Across Washington, the joke spread at Hurd's expense that artists should be seen, but not Hurd, at the White House. Peter Hurd's portrait of President Johnson now hangs here in the National Portrait Gallery.

The first family wasn't (quite) all jokes. As Mr. Bush reflected on being custodian of the presidency these last eight years, Knoller reports, tears welled in his eyes. 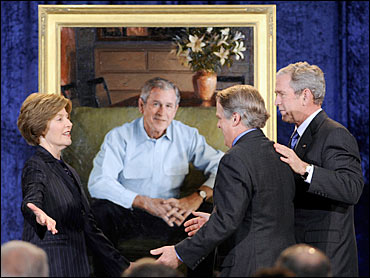