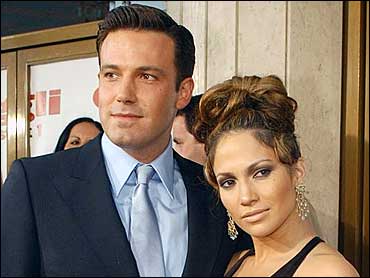 Plans for the Jennifer Lopez and Ben Affleck wedding are so hush-hush that they haven't even told their hundreds of guests where the ceremony and reception are going to take place yet.

But Us magazine's senior editor Caroline Schaefer managed to uncover some details. She tells The Early Show co-anchor Rene Syler the wedding is going to happen: "Sunday, September 14, somewhere near Santa Barbara, Calif., probably a hillside estate, perhaps a winery."

The reason the couple chose Santa Barbara might be because it is close to their friends, Schaefer notes.

Schaefer says last Thursday, Aug. 28, 400 phone calls went out. "They said save this date, this will be the wedding date. Four days before the ceremony, you will get hand-delivered details of where and the time," she says.

Two weeks ago, Jennifer and Ben dined on the patio of the Four Seasons Hotel, which is catering the wedding, and J.Lo's sister, Lynda, and other guests have booked rooms there.

With a courtship and engagement that everybody has been talking about, Schaefer says, "They did a good job of keeping it (the wedding plans) quiet."

Schaefer says J.Lo is definitely wearing a custom-made Vera Wang gown. "It will be ready by Sunday. Hair and makeup is booked. As many yellow roses as possible are being found for Jennifer."

In this week's issue of US magazine, different gown styles are shown to see what might look best on her.

But that does not look like her style anymore. Schaefer predicts she will go with "something sleek, sexy, something very much J.Lo."

But many people are surprised they are even making it to the altar.

The couple has been under a lot of pressure lately. Schaefer explains that Affleck had been filming "Paycheck" in Vancouver, when (on July 17) he decided to go to a local strip bar called Brandy's Exotic Nightclub where he ran into fellow actor Christian Slater with wife Ryan Haddon, as well as actress Tara Reid. They all convened to the VIP room, where some say the prospective groom began touching and kissing some of the strippers.

The group supposedly continued the evening at Slater's rented house with another group of strippers. It is unclear where or if Affleck may have exhibited inappropriate behavior. Of course, this all sparked lots of talk and it all came on the heels of the couple's box office bomb "Gigli."

Schaefer says, "People close to them say they are totally in love, totally committed to each other. Yes, I mean they are under the microscope 24/7. Their movie was a bomb, $5.6 million in the first 10 days. The strip club rumors, but people say they're in love and committed."

At the premiere of "Gigli" the couple looked uncomfortable. But Schaefer notes, "Would you like a camera in your face all the time? I think they've had it with the paparazzi following them around and making their lives front-page news."

As for the guests, Ben's brother KC Affleck will be present and probably be the best man. Of course, buddy Matt Damon will be by Ben's side as well.