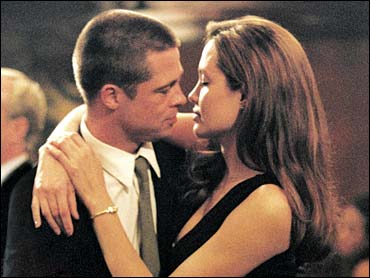 Brad and Angelina, Tom and Katie, Nick and Jessica - it seems people can't get enough of hearing about the gritty details of celebrities' lives.

It's called being "star struck," and it's a phenomenon that is not only bigger than life - it's bigger than ever.

"You have a confluence of forces coming together in technology and the media to make it happen and it's worldwide and it's multiplying like lice," says Stuart Fischoff, Ph.D., spokesman for the American Psychological Association and professor emeritus of media psychology at the California State University at Los Angeles.

Indeed, from the international mania of the New York Post's Page Six, to increasing circulation of celebrity-driven publications like People, US, OK, and In Style, to the cult star status of gossip reporters like Entertainment Tonight's Mary Hart and the New York Daily News' Rush & Malloy, there is no question that all-things-celebrity have captured - and are keeping - our attention like never before.

But what drives our endless fascination with celebrity worship? And more important, can its enticing seduction ever be harmful to our health?

The answer, it seems, depends a lot on who is doing the worshipping - and the reasons why.

"Like most things there's a dimensional approach here; there are some people who are fascinated by celebrities lives, but also involved in meaningful activities and relationships in their own lives, and for these people star watching is usually a harmless diversion," says Eric Hollander, M.D., professor of psychiatry and director of the Compulsive, Impulsive and Anxiety Disorders program at Mt. Sinai School of Medicine in New York City.

For others, however, things don't go quite that way.

Hollander says there are an increasing number of us for whom the fascination with celebrities is a substitution for real life - with the focus on a celebrity replacing the focus that should be on our own lives. And that, he says, is the point at which some folks begin to get into trouble.

Depression, anxiety, and a decrease in self-esteem are just some of the documented problems that can result when we take the focus off our own lives and instead focus all our energy on the life of a celebrity.

The Science of Hero Worship

The theory behind how and why we come to worship celebrities (and why some of us are more affected than others) is a pop-culture question almost as old as pop culture itself.

In fact, experts say that as long as there have been those who pull ahead of the crowd in fame or fortune, there has been a curious crowd wanting to follow.

Fischoff, who has academically studied the cult of celebrity, says the very need to find an idol and follow him is programmed into our DNA.

"What's in our DNA, as a social animal, is the interest in looking at alpha males and females; the ones who are important in the pack," says Fischoff. We are sociologically preprogrammed to "follow the leader," he says, and notes that we are biochemical sitting ducks for the Hollywood star system; even the stars themselves get caught up in the mystique.

"I know celebrities that are star struck by other celebrities - even major politicians are more likely to sit up and take notice of an issue when a celebrity is doing the talking. So this is clearly something that really is in our DNA," says Fischoff.

However, the real issue may be that some of us clearly handle the impact of that DNA better than others. That's precisely the finding of several studies that helped establish the idea of "Celebrity Worship" as a recognizable mental health problem for some.

In research published in the British Journal of Psychology, psychologists established a "sliding scale" of celebrity worship - one in which the devoted fan becomes increasingly hooked into the object of their attention, until their feelings begin to resemble addiction.

In another study with more than 600 people, psychologists found that about a third qualified for a condition they coined "celebrity worship syndrome" - a condition wherein, at its most severe, the object of our worship becomes the central figure in our lives.

"Information about the celebrity, or any little thing from their life, is like a fix the worshipper must have - they are almost compelled to learn more, read more, know more. And it's nonending," says Long Island, N.Y., psychologist Abby Aronowitz, Ph.D. Experts say some even begin to believe they have some special connection to the celebrity.

Not surprisingly, the study also found feverish fans are likelier to suffer from anxiety, depression, and social dysfunction. And while the authors are clear on the fact that being a fan does not cause you to be dysfunctional, they say it can certainly increase your risk.

While our DNA may set us up for star worship, it's clear not everyone takes it to the extreme. For those that do, Fischoff says the mania is, in a way, a star-studded egg just waiting to hatch.

"A lot of these people who fall deeply into celebrity worship are just abnormal pathology waiting to happen. The fact that it comes out in the form of idolization of a particular celebrity is less important than recognizing the pathology was there all along. And if it was not focused on a celebrity it would be focused on something else, but it would still be there."

Aronowitz agrees, but also says the entertainment media is at least partly to blame for creating the "monster" known as the celebrity superfan.

"The whole Hollywood spin machine works together to create images that are impossible for any of us to live up to. They purposefully set us up to admire and even covet something we can never have," says Aronowitz.

Then, she says, when we are completely vulnerable, they sell us the image even harder - from headlines that titillate us with "celebrity secrets," to the books, diets, cosmetics, foods, jewelry, and clothes that promise we'll be closer to the ones we adore.

"There are fortunes being made by turning fans into victims, and all it starts by creating that frenzy known as celebrity worship," says Aronowitz.

Ironically, however, almost as quickly as the media builds our celebrity heroes, they break them via the increasingly growing practice of hanging a star's dirty laundry out for all to see. And it is this practice, says Aronowitz, that can have some very twisted and negative effects on fans.

"Prior to Marilyn Monroe, a star's life was hidden from the public. But now, instead of a glossy ideal, we see celebrity's ugly messes, including their drug and alcohol abuse, which, for many who admire these people, translates into a very dangerous message," says Aronowitz.

Indeed, a study published in the journal Lancet showed that adolescents who viewed smoking in movies were more likely to begin the habit themselves.

Others have hinted the same may be true for drug and alcohol use, as well as eating disorders such as anorexia, which can develop when fans try to emulate the unrealistic low weights of their favorite stars.

Moreover, extreme copycat desires of some can even turn deadly, when the one we worship takes - or loses - his or her life.

"Some, mostly young fans, can become so overwhelmed by the loss that they themselves begin to believe their life is not worth living," he says.

While for some, celebrity worship can be unhealthy, experts say that for most of us, it's a pleasant diversion that can actually improve our lives. This is particularly true when the object of our interest sets a good example that helps us strive to achieve our own ideals.

"If you idolize someone for their accomplishments, and those accomplishments spurn you on to make gains in your own life, then admiring a celebrity can have a positive influence on your ambition, or even your mental health," says Aronowitz.

Indeed, many say that the popularity of Donald Trump's hit show The Apprentice and his own new-found star status stemmed from the fact that both he and the show provided a can-do attitude that inspired many young viewers to move forward on their own dreams. This mirrors the success - and the feverish fan base - for shows like American Idol, the Hollywood dream machine that showcases fresh talent from around the country.

Experts say hero worship can yield even more positive results when celebrities take to the streets with campaigns that encourage good health - and ultimately help convince us to personally make changes in our own lives.

"Celebrities can have a positive influence on our life, with positive messages. They can be very helpful in terms of increasing awareness and decreasing stigma about many problems, including health problems, that might otherwise not get the attention they need," says Hollander.

Such was the case when Katie Couric launched her awareness campaign about colon cancer, when Brooke Shields gave postpartum depression some much-needed attention, or even when Michael J. Fox helped increase our own - and our politicians' - interest in stem cell research.

"In this respect, a celebrity can act almost like a support group - helping us to see that life is OK, that I can do this, you can do this," she says.

Indeed, if there is a key to being a "healthy" fan, experts say it is in our ability to enjoy what a celebrity brings to our life, without them becoming our life.

"If you can just have fun with it, if it's not replacing emotional connections in your real life, then it's really all OK," Aronowitz concludes.