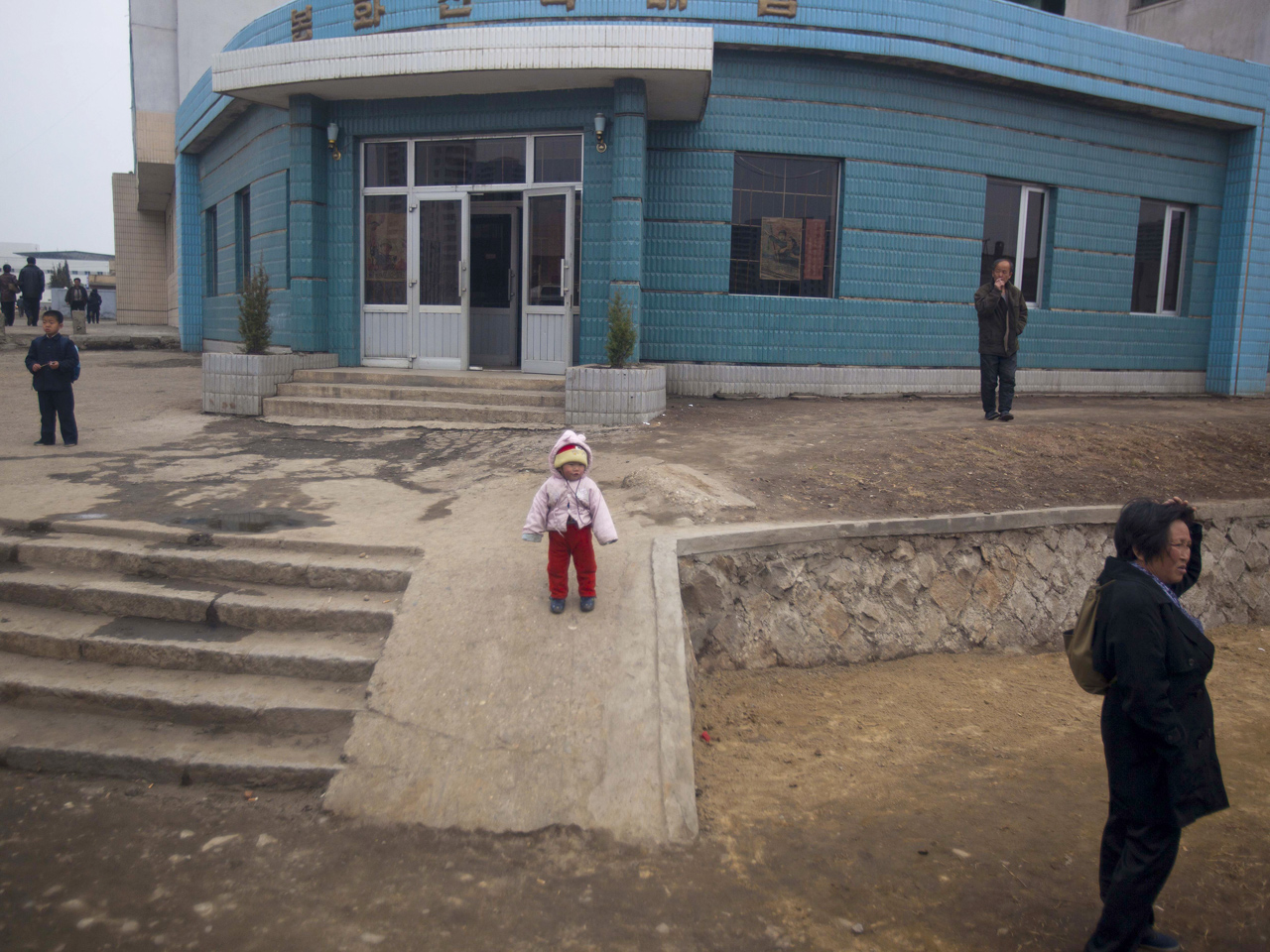 A cloud of brown dust swirled down deeply potholed streets, past concrete apartment buildings crumbling at the edges. Old people trudged along the sidewalk, some with handmade backpacks crafted from canvas bags. Two men in wheelchairs waited at a bus stop. There were stores with no lights, and side roads so battered they were more dirt than pavement.

"Perhaps this is an incorrect road?" mumbled one of the North Korean minders, well-dressed government officials who restrict reporters to meticulously staged presentations that inevitably center on praise for the three generations of Kim family who have ruled this country since 1948.

So as cameras madly clicked, the drivers of the three buses quickly backed up in the narrow streets and headed back toward the intended destination: a spotlessly clean, brightly-lit, extensively marbled and nearly empty building that preserves digital music recordings and makes DVDs.

It was at the Hana Music Information Center, a guide told the reporters, where North Korea's longtime leader, Kim Jong Il, made one of his last public appearances before his December death.

"I hope that the journalists present here report only the absolute truth," said Ri Jinju, her voice trembling with emotion, her flowing hair frozen with hairspray. "The truth about how much our people miss our comrade Kim Jong Il, and how strong the unity is between the people and leadership, who are vigorously carrying out the leaders' instructions to build a great, prosperous and powerful nation."

In North Korea, it's hard to know what's real. Certainly, you can't go looking for it.

Anyone who leaves the press tour, or who walks from the few hotels where foreigners are allowed, can be detained by the police and even threatened with expulsion.

But even in such a controlled environment, reality asserts itself.

Is reality the cluster of tall buildings within view of the main foreigners' hotel, where long strings of bright, colored lights are switched on when the sun goes down, illuminating entire blocks like some gargantuan Christmas decoration? Or is it the vast stretches of Pyongyang, by far the most developed city in impoverished North Korea, that go deathly dark at night?

Is the reality along Pyongyang's drab-but-spotless main roads, the only streets that journalists normally see, with their revolutionary posters urging North Koreans to struggle toward a Stalinist paradise? Or is reality on the streets near the music center?

"They've left very few stones unturned in North Korea," said Anthony Brunello, a professor at Eckerd College in St. Petersburg, Florida, who has studied totalitarian propaganda methods. He said officials will go to nearly any extreme to create a system that will keep the Kim family in power.

If that means using propaganda that seems insensible to outsiders, few of whom believe the official version of Pyongyang as a communist idyll, it is very logical in Pyongyang. After all, the Kims still hold power.

"They've managed to create a process of control that works," he said.

Most foreign visitors to Pyongyang never encounter a pothole, a traffic jam or a piece of litter larger than a cigarette butt. There see no people with physical disabilities, and no graffiti.

They normally see only the clean streets outside their bus windows, and the showcase buildings -- the Victorious Fatherland Liberation War Museum, the palace commemorating the Kims' "juche" philosophy of self-reliance, the computer labs at Kim Il Sung University -- filled with people that the minders insist are everyday North Koreans.

The students in the classrooms don't glance up as dozens of reporters rumble in, and the professor's lecture continues without pause. The young people in the university pool careen down the plastic slide, in front of TV cameras, as if they are completely alone.

Perhaps they are real students. But look straight into the eyes of these people, and their pupils dance around you like you're not there, as if they've been trained to pretend you are not. Only the official guides, always beautiful women in flowing polyester gowns in ice-cream colors, will talk readily.

They speak in relentless, rote hyperbole.

"The more time passes by the more we miss our Dear Leader Kim Jong Il," said Ri, the music center guide. "I don't think we can ever find any person so great."

Behind that robotic facade, though, North Koreans want the same things as just about everyone else; at least, that's what defector after defector has said.

They fight with their wives and worry when their children get fevers. They wage office politics, dream of buying cars and, if they have enough clout, they hope to get away to the beach in the summer. When times are at their worst, as they were when famine savaged the country in the 1990s, they dream of enough food so their children won't starve to death.

It's not clear why the regime hides places like the dusty, potholed neighborhood, which is just a mile or so from the center of town, across the trolley tracks and just off Tongil Street.

It doesn't look like a war zone, or even like a particularly rough New York City neighborhood. Many streets in New Delhi, the capital of one of the world's fastest-growing economies, look far more battered and far poorer.

To most North Koreans, one-quarter of whom depend on international food aid, living in homes without electricity or running water, the neighborhood would look upper-middle-class. Special permits are required to live in the capital city, and life here is vastly better than it is for most people in the countryside.

There are predictable government jobs here, electricity at least a few hours a day, better-stocked stores, schools that have indoor bathrooms.

But the officials still hide the run-down neighborhoods. There's a certain view of North Korea they want visitors to have.

Maybe, though, the regime is opening up. In past years, media minders would order reporters to put down their cameras if they saw something they felt didn't reflect well on North Korea. At times, they would close the curtains on the buses.

But on Thursday, the minders said nothing as the cameras clicked away. The journalists stared. And outside the bus, the North Koreans who never expected to be seen stared back.