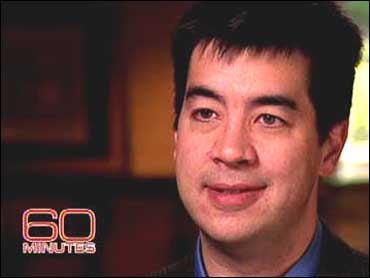 David Kuo is an evangelical Christian and card-carrying member of the religious right, who got a job in the White House in the president's Office of Faith-Based and Community Initiatives. He thought it was a dream-come-true: a chance to work for a president whose vision about compassionate conservatism would be matched with sweeping legislation to help the poor.

But Kuo says the so-called compassion agenda has fallen short of its promise and he blames President Bush for that in his new book.

As correspondent Lesley Stahl reports, he also says the White House was a place that cynically used religion for political ends and that White House aides ridiculed the very Christian leaders who helped bring Mr. Bush to office.


In his book, Kuo wrote that White House staffers would roll their eyes at evangelicals, calling them "nuts" and "goofy."

Asked if that was really the attitude, Kuo tells Stahl, "Oh, absolutely. You name the important Christian leader and I have heard them mocked by serious people in serious places."

Specifically, Kuo says people in the White House political affairs office referred to Pat Robertson as "insane," Jerry Falwell as "ridiculous," and that James Dobson "had to be controlled." And President Bush, he writes, talked about his compassion agenda, but never really fought for it.

"The President of the United States promised he would be the leading lobbying on behalf of the poor. What better lobbyist could anybody get?" Kuo wonders.

"I was there before 9/11. I know what happened before 9/11 … The trend before 9/11 was…president makes a big announcement and nothing happens," Kuo replies.

Kuo speaks as an insider. Even before he became the number two guy in the White House faith-based office, he had a long resume in the world of Christian conservatives.

Kuo says he took candidate Bush at his word during the 2000 campaign.

At the time, Bush proposed for the first time that he would spend $8 billion dollars on programs for the poor.

"I think it's one of the most important political speeches given in the last generation. I really do," says Kuo. "It laid out a whole new philosophy for Republicans."

After the election, to much fanfare, President Bush created the office of faith-based initiatives to increase funds to religious charities.

But Kuo says there were problems right off the bat. For one, he says the office dropped very quickly down the list of priorities.

"When you hold it up to a promise of $8 billion, I don't know how good I am at math, but I know that's less than one percent of a promise," says Kuo.

Part of the problem, he says, was indifference from "the base," the religious right. He took 60 Minutes to a convention of evangelical groups – his old stomping ground - and walked around the display booths, looking for any reference to the poor.

"You've got homosexuality in your kid's school, and you've got human cloning, and partial birth abortion and divorce and stem cell," Kuo remarked. "Not a mention of the poor."

Kuo himself often confused the two. He was a pioneer of the compassionate conservative movement, but began to go off the tracks when he, like other evangelical speechwriters, wrote for some of the stars of the Republican party, with hidden snippets of hymns and biblical phrases.

"A way to talk about faith without having people in the mainstream media identify it as faith," he explains.

As in this speech, delivered by President Bush, which Kuo didn't write: "There's power, wonder-working power in the good and idealism and faith of the American people."

If "wonder working power" sailed over your head, most evangelicals recognize it from a famous hymn.

"God and politics had become very much fused together into a sort of a single entity. Where, in a way, politics was the fourth part of the trinity. God the father, God the son, God the holy spirit, God the politician," says Kuo.

"You're blowing the whistle on you. You're the one who did this," Stahl remarks.

"I say this as someone who has lived it, not as someone who preaches it, as though I'm holier than thou. I am the least holy among thou," he replies.

Kuo actually left politics for a while. But then he was summoned to Austin, Texas to meet then-Governor Bush.

Kuo thought they'd talk for 15 or 20 minutes; instead he says they talked for hours and he admits he was "dazzled" by Bush's compassion.

But once in the White House, he says President Bush and his team let the compassion agenda "languish."

"Well, they say they tried. They say they wanted these programs. And this is the give and take of political life. And that you're being unfair," Stahl says.

"It all comes down to the fact that if the president wanted it, he would have gotten it," Kuo replies.

The White House calls Kuo's book "ridiculous," and Kuo's old boss, Jim Towey, who ran the faith based office until this past June says Kuo is "naïve and simplistic."

"I think it's dangerous to take a snapshot of a few months or even a year and draw conclusions," Towey says. "Ya know, I can look you in the eye and say the president did what he could do."

Kuo says Towey and the White House were embarrassed when the Washington Post ran an article in September 2002 saying they were using the faith office to woo voters, even though the president had repeatedly pledged it was not political.

The White House shot down the Washington Post story, but now Kuo reveals it was all true, and what's more – he's the one who thought up the idea.

"This is your idea to tie this office, that was supposed to be non-partisan, you come up with this idea to tie it to the campaign?" Stahl asks.

"Uh-huh," Kuo affirms. "I want this initiative to work."

"And you think if you can get it tied – hooked in with the political people, that they'll then come back and support you, is that the thinking?" Stahl asks.

"This is not rocket science or brain surgery, this is a matter of survival," says Kuo.

He says he went to the White House political affairs office, then run by Ken Mehlman, and offered to hold events at taxpayer expense for Republicans in tight races as a way of energizing religious voters.

Events in 20 key races, Kuo says, were eventually held. Jim Towey disputes that, though he does confirm the meeting with Ken Mehlman. "But never, never was I going to go out there and politicize this initiative," Towey tells Stahl.

Asked if Mehlman crossed the line in even discussing it, Towey says "No."

"Did you cross over the line in discussing it with Ken Mehlman?" Stahl asks.

"When I came to the White House, I came with my eyes wide open. I knew there were going to be political pressures from Republicans, from Democrats. And the reality is President Bush gave me very clear marching orders not to politicize the initiative," Towey says.

Towey says he was evenhanded in running the events, organizing some at the request of Democrats. But Kuo stands by his version.

Asked if in retrospect this was morally wrong, Kuo says, "I feel like it was more spiritually wrong. You're taking the sacred and you're making it profane. You're taking Jesus and reducing him to some precinct captain, to some get-out-the-vote guy."

Kuo believes they helped some Republicans win elections, but that didn't translate into more money for religious charities.

"David Kuo says that what the president delivered on the faith-based initiative was a 'whisper' of what he promised," Stahl tells Jim Towey.

But Towey says it's not true. "He has delivered on every single thing he promised."

"But not the money," Stahl replies.

"But not every cent of it," Towey says. "He's not king. He had to work with Congress. It's naïve to say, 'Oh, because the president asked for it and didn't get it, that meant he didn't really want it.'"

And, Towey says the White House got more money after Kuo left.

"Here's the White House: they say 'Okay, we've added $740 million to these programs. We signed an executive order ending discrimination against religious charities.' I mean, they say that these are genuine accomplishments. And aren't they?" Stahl asks Kuo.

"I think, perhaps for any other president, you know it's not bad. But when he continued to make a promise in the campaign and over and over again: 'This is my signature domestic policy initiative,' and you look at the numbers and you say, 'Well, it really doesn't match up with a man who says that,' and he was supposed to be different," says Kuo.

"Are you being a little naïve?" Stahl asks. "In the sense that the president operates in a political world where everything is compromise, where new priorities had to bubble up because of 9/11. And how could he fight for these programs when he had to worry about Iraq and all these other issues?"

"You know if naïve is believing in a promise, I'll plead to that sort of naiveté," Kuo replies.

This has been gnawing at both him and his wife since 2003, when he learned he had a malignant brain tumor, and left politics for good. Now he has written his book, "Tempting Faith," published by a CBS sister company.

"I have this burden on my heart that the name of God is just being destroyed in the name of politics," Kuo says. "I felt like I had to write this."

"You're calling for a fast. That's your expression," Stahl remarks.

Asked if he thinks the White House is going to view his book as a betrayal and may go after him, Kuo says, "Of course they will. I can hear the attacks, right? 'Oh, he's really a liberal.' or, 'Oh, maybe that brain tumor really messed up his head.' Or, you know, 'He's an idealist.'"

"But you're okay with that?" Stahl asks.

Says Kuo, "I'm fine with it."
Produced By Rich Bonin

9/25/2022: The Secretary of State, Inside the Committee, Rescuing Reefs