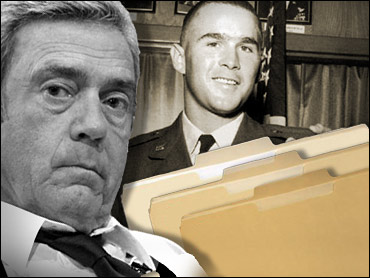 CBS News formed the independent panel that issued Monday's report on Sept. 22, 2004, after two weeks of controversy and criticism over a 60 Minutes Wednesday story about President George W. Bush's National Guard service that aired on Sept. 8.

The story, reported by CBS News Anchor Dan Rather and produced by Mary Mapes, examined whether Mr. Bush had completed the requirements of his National Guard service in the early 1970s. The story prominently used documents that were later discredited.

The report featured an interview with former Texas Lt. Gov. Ben Barnes, a Democrat. Barnes said he pulled strings to get Mr. Bush into the Guard in 1968, allowing him to avoid service in Vietnam.

But it was the use of documents that were reported to substantiate Barnes' claim that caused a firestorm.

Mr. Bush moved to Montgomery, Ala., to work in the Senate campaign of a family friend, Winton Blount. As required, he joined the local Guard unit to complete his service.

The documents used in the 60 Minutes story seemed to indicate that Mr. Bush disobeyed a direct order to appear for a physical, and that friends of the Bush family tried to "sugarcoat" any probe of his service.

Shortly after the story aired on Sept. 8, criticism erupted on the Internet that questioned the authenticity of the documents. Skeptics said the documents appeared to be crafted by modern computers and not early-1970s typewriters. In addition, critics claimed that there were stylistic differences between these documents and ones that Killian was known to have written.

Both the timing and flaws in the original report led to charges that the story was motivated by partisanship. Throughout the presidential campaign, the Vietnam era service of President Bush and his Democratic opponent, Sen. John Kerry, had been an issue.

CBS News vigorously defended its story for more than a week after it aired.

Two days after the story was first broadcast, The Washington Post ran a front-page article headlined, "Some Question Authenticity of Papers on Bush." That night, Rather said on the CBS Evening News that much of the criticism came from "partisan political operatives."

On September 15, CBS released a statement defending the original report.

"The editorial content of the report was not based solely on the physical documents, but also on numerous credible sources that supported what the documents said," the statement read. "Through all of the frenzied debate of the past week, the basic content of the 60 Minutes Wednesday report – that President Bush received preferential treatment to gain entrance to the Texas Air National Guard and that he may not have fulfilled all of the requirements – has not been substantially challenged."

The network further stated: "The 60 Minutes Wednesday broadcast reported that it obtained six documents from the personal files of Lt. Col. Killian, four of which were used in the broadcast. In accordance with longstanding journalistic ethics, CBS News is not prepared to reveal its confidential sources..."

The following weekend, a former Texas Air National Guard officer, Bill Burkett, admitted that he provided the documents to CBS News and that he lied to CBS about how he obtained the documents.

In response, CBS News said on Sept. 20 that it could no longer verify the authenticity of the documents. It acknowledged for the first time that the source of the documents was Burkett.

"Now, after extensive additional interviews, I no longer have the confidence in these documents that would allow us to continue vouching for them journalistically," Rather said in a statement. "We made a mistake in judgment, and for that I am sorry. It was an error that was made, however, in good faith and in the spirit of trying to carry on a CBS News tradition of investigative reporting without fear or favoritism."

To respond to the situation, White House spokesman Scott McClellan held a press conference in New Hampshire on Sept. 20.

"There are reports that he had senior-level contacts with members of the Kerry campaign; there are reports that he misled CBS on who the original source of the documents were; those are serious questions," McClellan told reporters. "Why did CBS rely on Burkett, a previously discredited source, for this information? CBS said that he was an unimpeachable source. The fact is he is not an unimpeachable source, he is a discredited source from the past."

Rather told his viewers on the news broadcast that night, "I want to say personally and directly I'm sorry."

It surfaced later that Joe Lockhart, then a senior adviser to the Kerry campaign, was called by CBS News producer Mary Mapes, only days before the story aired. Mapes put Lockhart in touch with Burkett.

On Sept. 21, CBS News acknowledged the contact with the Kerry campaign in a statement: "It is obviously against CBS News standards and those of every other reputable news organization to be associated with any political agenda."

News that the story's lead producer contacted a Kerry campaign in this way infuriated Republicans. It also drew criticism from many journalists.

The controversy became an issue in the presidential election. What first appeared to be bad reporting became complicated by appearances of possible political bias.

CBS announced the formation of the independent panel the nest day, Sept. 22. The panel was charged with finding out what went wrong.

Overseeing the investigation were former Pennsylvania governor and U.S. Attorney General Richard Thornburgh, a Republican, and Louis Boccardi, the retired Associated Press president and chief executive. In a statement, CBS News pledged that the panel "will have full access and complete cooperation."

CBS News stated that it did "deeply regret" not putting the documents under greater scrutiny.

Rather, 73, announced on Nov. 23 that he was going to resign as anchor and managing editor of the CBS Evening News but remain on at 60 Minutes.

Rather, who insisted the move was not tied to the controversy, has held the anchor post longer than anyone in network television history. He will leave the Evening News in March.