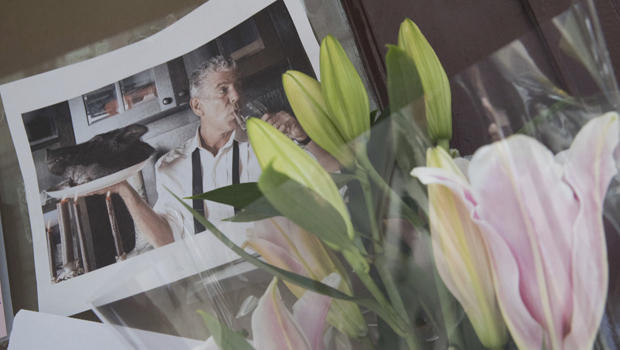 A LIFE CUT SHORT by personal despair is a reality that's happening with increasing frequency across our country. And the news of two celebrity suicides this past week only hints at the dimensions of this public health crisis. Our Cover Story is reported by Tony Dokoupil:

She was the woman behind the handbags, her name a by-word for elegance, while he was proudly inelegant, a New York chef whose TV shows turned food into adventure.

But this past week, Kate Spade and Anthony Bourdain, so different in life, shared something in death. Both took their own lives – Spade at home in Manhattan, Bourdain at a hotel in France … by themselves, but they were far from alone.

When asked if she could relate to Spade and Boudain, Caitlin Coleman said, "Of course. I would say anyone who has either died by suicide or attempted suicide, I can relate to."

How come?  "Because I know what it's like to be that desperate and to feel like you don't have any options. To feel like, you know, every breath is an effort.

When she was 19, Coleman, after years of deepening depression, attempted suicide. This week she reacted to the news about Spade and Bourdain with sadness, but not shock. Unlike many Americans, she knew wealth or even fame won't protect a person from despair.

Coleman said, "None of us know these people. Everyone has a public persona."

"So, when you have quotes from these people's families and friends saying, 'I never saw it coming,'?" asked Dokoupil.

"They probably didn't, because they didn't want you to see it coming."

And so what we are left with are questions: How could two people with so much have nothing to live for?  What becomes of their children?  And most important perhaps, what could anyone have done to stop it?

"In these situations, like, I can't pretend to know," said Mike Shinoda of the genre-bending band Linkin Park. Last year, Shinoda  lost his friend and the band's front man, Chester Bennington, to suicide, just weeks after celebrating a sixth #1 album.

Shinoda said, "The one feeling that I had that was really weird was a guilt for feeling sometimes, like, mad. Like, mad at him sometimes a little bit, but, like, mad about just everything else."

Next week, Shinoda has a new album, "Post-Traumatic," made while mourning Bennington.

He told Dokoupil, "Maybe it sounds crazy, but I do sometimes, like, just talk to Chester. Like, Man, I wish you were here.  You'd really love this!"

Executive director John Draper said, "We have about 12.5 million people with suicidal ideation every year."

Dokoupil asked, "Which means they're thinking about it?"

"Yeah. And we answered about two million calls last year. So, that's a lot of calls. But we still have a lot more people to reach."

"How often do the callers in this room save a life?"

Every day?  "Every day, and arguably every minute.  If you think you're worried about somebody, and you think something might be going on, and you don't know how bad it is, ask 'em directly: 'Are you thinking about suicide?' We've found from research that asking that question doesn't scare people. They feel relief."

What perhaps should scare people is this: Suicide now takes more lives annually than car accidents, and twice as many as murder. And it's on the rise, up 25 percent, since 1999. In half the country, the spike is more than 30 percent.

Dokoupil asked Dr. Jeffrey Lieberman, chair of the psychiatry department at Columbia University and New York Presbyterian Hospital, "If you were a heart doctor, and a report from the CDC came out that said a 30% increase in deaths by heart attack – how do you feel when you get these numbers?

"Hey, I live with it every day," he replied. "It's appalling. And everybody goes, 'Oh my goodness, what's happening? Why is this?' It's apparent why. It's because our country has a dysfunctional and inadequate health care policy, and particularly when it comes to mental health care."

Because suicides have trended upward through good economic times and bad, researchers are still trying to determine the causes.

"The question is, when does it reach a threshold that they're impelled to do this? Often, it happens impulsively after something happens immediately in their life."

The largest spike in suicides is among people 45 to 64 (like Anthony Bourdain), and among women (like Kate Spade). The suicide rate for white middle-aged women has leaped 80 percent since 1999.

But, he added, there's reason for optimism.

"Death should not be an outcome of mental illness. And zero suicide is an absolutely achievable goal."

Today at 35, Caitlin Coleman says she's happy  -- excited by her life ("Yeah, now is awesome"), and clear about what suicide is, and is not.

Study: 1 out of 6 hospital trips result in "surprise" medical bills

What judge's ruling means for people covered under Obamacare
More