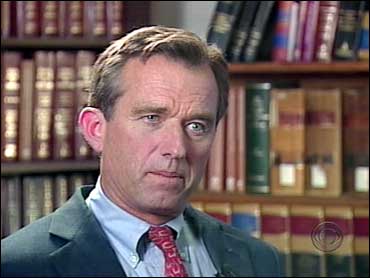 Is there a link between autism and childhood vaccines?

Medical experts say no -- resoundingly -- but some advocacy and parent groups and scientists disagree. As CBS News Correspondent Sharyl Attkisson reports, those who believe there is such a link now have the forceful and highly controversial support of Robert F. Kennedy, Jr.

Advocates say that it's no coincidence that one new study indicates that when a mercury preservative was removed from most vaccines, autism rates in California went down. After growing for more than a decade, new cases of autism may be slowing down in California. That's according to data compiled by the state that has been on the leading edge of identifying and tracking the nation's autism epidemic. The trend is fueling a debate over vaccines and the autism epidemic--a debate that Kennedy has now entered.

Kennedy is lending the famous family name to a new cause: the idea that something in vaccines triggered the autism and ADD epidemics.

Attkisson asked Kennedy what he thought when he initially heard of the link between autism and childhood vaccines.

"I was skeptical but sympathetic," says Kennedy. "These are people who have been through hell, literally."

After researching studies on both sides, Kennedy became a believer.

"The science connecting brain damage to thimerosal is absolutely overwhelming," he says.

What is thimerosal? It's a vaccine preservative containing mercury, which is a known neurotoxin. It was in lots of kids' vaccines thru the 90's, as the CDC kept adding new shots. At the same time, autism and ADD cases skyrocketed.

Not only that, but there's new word this week from the bellweather state of California: as mercury has been phased out of most childhood vaccines in recent years, new autism cases have declined. But that is just one study.

"Based on what we know right now, we don't think there's an association," says Dr. Popovic.

Studies suggesting a link have been dismissed by virtually all mainstream medical organizations in America and Europe. And health officials are concerned that high profile advocates like Kennedy could stop parents from vaccinating their children and deadly epidemics will return.

Despite all the attention he is getting, Kennedy tells Attkisson that there is resistance to putting the debate out in the public. He says he wrote an op-ed piece on the issue -- but no publication would print it, he says.

"I went to all the major newspapers and nobody would touch it," he says.

One publication did bite. Salon.com printed Kennedy's article in which he made a highly speculative and unproven claim of a full-fledged government cover-up.

Government officials, for example, held a private meeting when an early study did connect mercury in vaccines to autism, ADD and more. The public wasn't invited--but pharmaceutical companies were. One official at the meeting said "we are in a bad position from the standpoint of defending any lawsuits" without more research.

Kennedy insists there is a cover-up. Dr. Popovic refutes this claim.

"Quite to the contrary," she says. "We've always been open about all of our activities."

Meanwhile, public health officials struggle to end the whole vaccine-autism debate. But with the Kennedy name attached, it seems destined to survive in controversy for now.