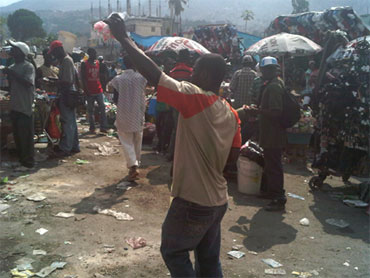 It's hard to believe this is my seventh day in Haiti. It all blurs together and time seems to have has passed much too quickly. It doesn't mean that I'm having fun – not by any means – but it does mean that I'm busy and have little idle time here.

Today's trip out was through downtown Port-au-Prince. There were thousands of people in the streets, vehicular traffic running willy-nilly. (Turn signals and stopping for red lights are optional, and drivers here often create their own lanes to get around traffic). In many ways it's like the Wild West with the outlaws making the rules.

The mood was ugly. I hate that word because it is so overused by the media ("Give us a sense of the mood there"). But you can really feel the mood in the air. I didn't see any looting – at least I don't think so. But the faces I saw today ran from desperation to anger or simply menacing. The sentiment seemed to be "don't mess with me." Many men were carrying weapons, or things like metal pipes or strips that could pass for weapons. It didn't look as if they were headed to plumbing or construction jobs. For some, they'll serve as offensive weapons, for others, strictly defensive.

It was my first trip into deep downtown, and the first time I've really been scared here.

We also went to the bus station. There's no building but there are a lot of busses, overcrowded and headed for points out of town. One woman told me that if the earthquake hadn't damaged her destination, she'd stay with friends or family. If it did, she said, she'd sleep in the streets.

People have set up a small marketplace at the bus station, selling everything from baseball hats (many with "I love Jesus" and fake New York Yankees emblems on the crowns) but they're not doing a lot of business.

One woman is selling rice, beans, and berries for a buck fifty a plate. One man is doing well selling radios and batteries from his stand, but another man selling batteries, flashlights and medicine from a shopping cart told me, "There's no one to buy. Everybody's gone or everybody's dead."

Of course, that's an exaggeration. The streets are packed with vehicles and people walking around endlessly and aimlessly. They're looking for food, water, supplies, medical help, or simply a ride out of town – because right now, in the eyes of many, anyplace is better than this one.