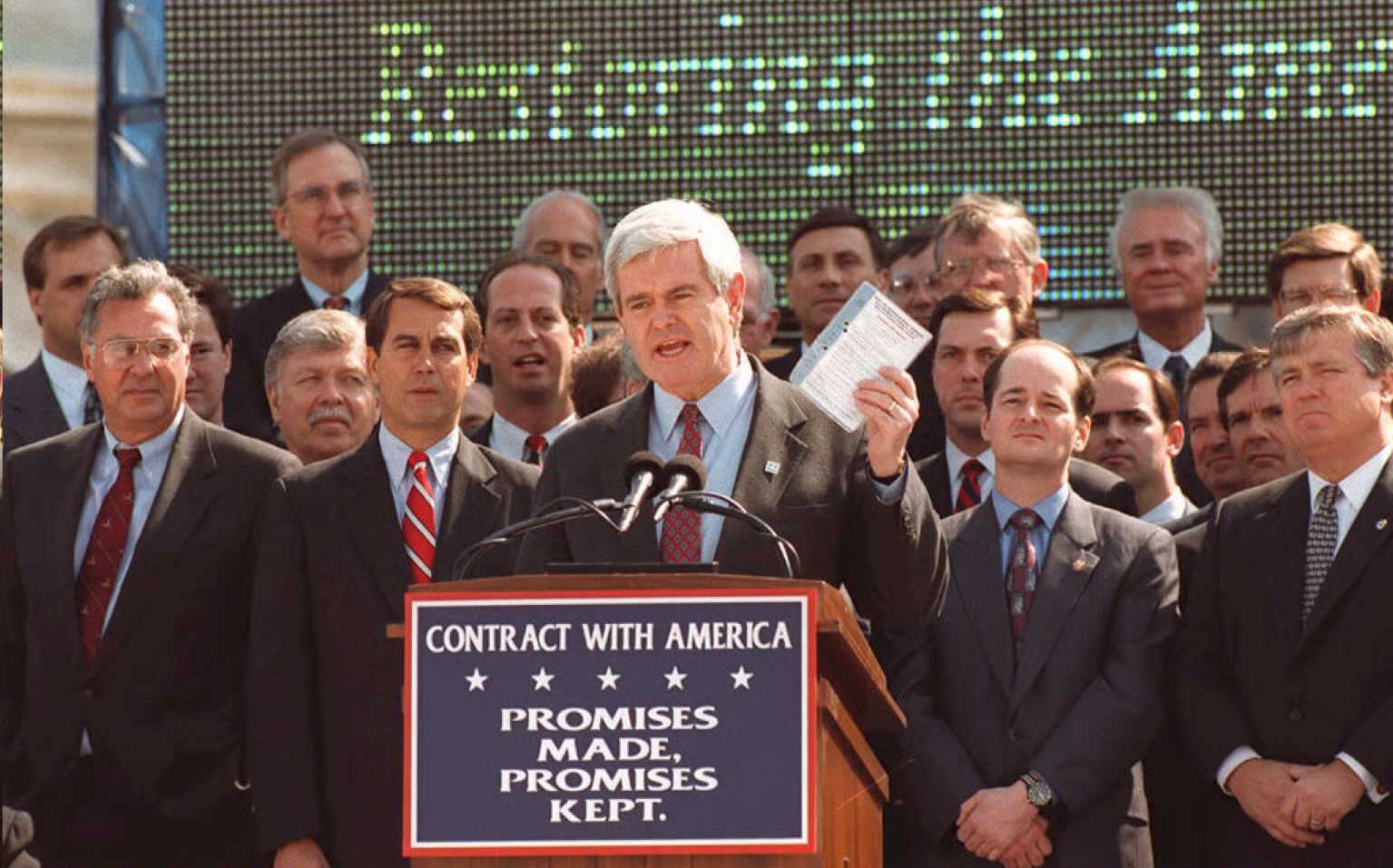 Republicans are about to wield the levers of power in the House and Senate under a Democratic president for the first time since Newt Gingrich squared off against Bill Clinton. There is a gauzy nostalgia about what the Clinton White House and the energized GOP-led Congress achieved, and what might be possible with that kind of divided leadership.

"Clinton didn't have the House or the Senate for six of his eight years," McConnell said. "Bill Clinton and the Republicans did welfare reform and actually balanced the budget three years in a row."

That's true. But the circumstances of those achievements are far different than what can be seen in the current political climate in Washington. The inclinations of President Obama, the dubious unity of the GOP congressional majority--neither shows any sign of the bipartisan velocity that propelled the government to take on welfare reform and a balanced budget twenty years ago.

How do I know?

Because I was there. I covered it. I even wrote a book about it.

All of the differences between then and now are too numerous to mention. But before we get into some of those the details, there are a few things that will give you an idea of just how different things were:

When the Contract With America catapulted Republicans into power, the GOP had not controlled the House in 40 years. The only House Republican with a living memory of a House GOP majority was Rep. Bill Emerson of Missouri. He remembered it because he witnessed it first-hand. As a House page.

When Republicans took control of the House and Senate McConnell was ranked 50th in Senate seniority and Harry Reid of Nevada, the outgoing majority leader, was ranked 57th. Can you say small fry?

When Republicans took control of Congress, their House conference was smaller than the one just elected--230 seats back then, compared to at least 243 for the GOP House to be sworn in next year. But they were unified behind the 10-item Contract With America, a policy document that served as a blood-oath legislative roadmap for the new majority (something the new GOP Congress will not have, and neither do they show any apparent appetite to generate).

The centerpiece was a balanced budget in a fixed number of years with congressionally supervised accounting (meaning the Congressional Budget Office). The pursuit of this particular goal can only be described as zealous. Historians have also described it as politically heedless, but Republicans did not see it that way. The incoming GOP majority has talked a voted a good game on balancing the budget...over time. There was no explicit goal outlined here by House Speaker John Boehner or Mitch McConnell.

In 1994, welfare reform--which has been mentioned by McConnell--was an idea Republicans had pushed for nearly two decades. It had begun to take root at the state level--especially in Wisconsin--had political appeal nationally, and Clinton, a centrist Democrat who rose as a successful governor, never explicitly ruled it out. But even that breakthrough came after two Clinton vetoes and a White House decision to erase the issue from Clinton's 1996 re-election campaign.

That brings us to the politics. After the 1994 election catastrophe, Clinton looked in every direction for guidance and strategy. He was, after all, a president who entered office with only 43 percent of the popular vote, and only one White House adviser, political director Doug Sosnik, had seen the GOP onslaught coming. Clinton's team joked ruefully throughout 1995 about their "second-term agenda" as if it were a satire too ridiculous even for "Saturday Night Live." Clinton was weak for most of 1995, a semi-bystander to the aggressive GOP agenda.

The budget conflict--two government shutdowns over GOP efforts to balance the budget while cutting taxes and the growth of Medicare by nearly identical amounts--revived Clinton. He drew firm lines against Republicans. He stoutly defended Medicare and portrayed them as unreasonably aggressive about balancing the budget. Clinton could do this because he'd already given so much ground on the budget. He had acceded to GOP demands to balance the budget in seven years and agreed to Congressional Budget Office scoring (this is why the CBO is the arbiter of all DC policy bookkeeping. The White House Office of Management and Budget had been a nominal co-equal accountant).

Clinton had to deal with a unified GOP Congress. And he had to find a way to win re-election. The politics of balancing the budget forced him to give some ground, but public fealty to Medicare buttressed Clinton during the shutdown showdowns. On welfare, Clinton knew signing a bill before the 1996 election would defang the issue for Republicans and boost his own centrist credentials.

The tenacity and unity of the GOP congressional majority, the centrist inclinations of Mr. Clinton, and the political imperative of re-election created a unique mix of opportunities, which both sides seized when no better alternative could be found. Clinton and the Republicans both needed to cut deals. And they did.

President Obama needs to cut no deals because unlike Bill Clinton in 1994, he has no looming re-election campaign. These Republicans are not as organized, energized and unified as the GOP majority of 1995. Mr. Obama doesn't have the centrist political heritage Mr. Clinton brought to Washington. He also doesn't have Mr. Clinton's facility with or love of legislative maneuvering and deal-making.

For their part, Boehner and McConnell lack their own Contract With America. Here's a brief survey of their stated goals, however.

The other painful reality that separates then from now is the on-going battle against terrorism. It's costly and requires constant White House and congressional funding, attention and cohesion. This was not a necessity under divided Clinton-era government. It is now. Cobbling together a new Authorization to Use Military Force in Iraq and Syria--a goal Obama has laid before Congress--will be an early and important test of war-fight bipartisanship neither Clinton nor Gingrich had to confront.

Lastly, Congress is different. Moderates existed in both parties in 1995. Southern Democrats still populated the House and Senate. Notheastern Republicans were more common. The era of Red State and Blue State politics was dawning. Now it is entrenched. That tends to prioritize partisan voting patterns over deal-making and policy innovation. This is not a new story. It has in part been one of Obama's biggest frustrations with the House GOP majority. And vice versa.

Both sides see each other as entrenched, unimaginative and indifferent. Activists in both parties reinforce this behavior, while moderate voters tend to swing--with equal measures of fatigue and frustration--between parties. The public swung toward Republicans in 1994, two years after Ross Perot's independent run for the White House. Then it swung back to the Democrats in 2006, who reinforced their majority in 2008 before the public swung yet again toward Republicans in 2010 and kept moving in that direction on Tuesday.

No one knows what Obama and the new GOP-dominated Congress will achieve. But it should be abundantly clear that the Clinton-Gingrich era can't show them the way forward. The gravitational pull of party, politics, policy and personalities could not be more different.

You don't need to be Rand Paul to see that.