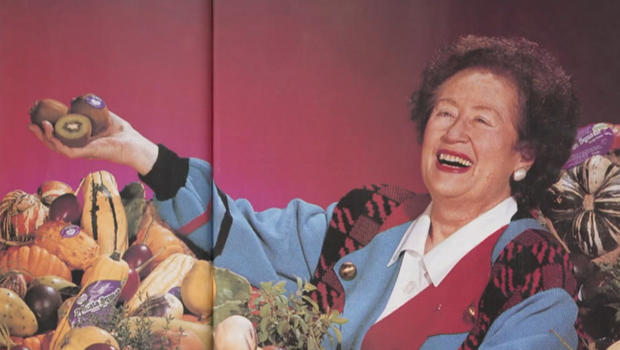 We take a moment to mourn the passing of someone you may not have heard of, but changed the way many of us eat. Frieda Caplan, who died Saturday at age 96, made a number of exotic fruits and vegetables household names. Rita Braver spoke with her this past fall:

A lot of people call Frieda Caplan the "Kiwi Queen." "It's a good name!" she said.

And it all started because Caplan accepted a suggestion to change the name of a fruit that was grown in New Zealand, but called the Chinese Gooseberry. "Why don't you call 'em kiwi fruit? Because kiwis are the national bird of New Zealand, and they looked just like a kiwi bird," she said.

It was 1962, the very same year that Frieda Caplan became the first woman in the United States to open a wholesale produce company, now called Frieda's. Her focus? Specialty products, persuading supermarkets to carry what were then unusual items, like shallots and ginger.

Correspondent Rita Braver asked, "What was your pitch? What would you say to them?"

Over the years the number of items she's introduced or promoted is more than 200, and still counting – foods we now take for granted, like Meyer lemons, habanero peppers and jicama, and stranger items like African horned melon, Buddha's hand, and yellow dragon fruit.

Today, Caplan's granddaughter, Alex Berkley, is director of sales for Frieda's. She showed Braver some of their produce, like finger limes which, when cut in half, expose little "bubbles." "So, if you squeeze it, it looks like little caviar," she said.

And their purple sweet potatoes make one heck of a pie.

In fact, Alex is the third generation of women in the family to work at the company. Her mother, Karen Caplan, is now president of Frieda's. And Frieda's younger daughter, Jackie Caplan Wiggins, is Vice President. She showed Braver some Bhut jolokia, also called ghost peppers. "They are one of the hottest chili peppers in the world," she said.

The company does nearly $100 million in business each year from a sprawling Los Alamitos, California facility.

At age 96, Frieda Caplan was going into the office every day until she was sidelined with a broken leg last year.

As for what Caplan hopes will be her legacy, Braver asked her, "What do you want people to say about you, after you're gone?"

"'I feel healthy because of Frieda,'" she replied.