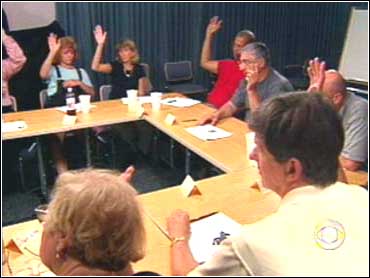 This election year, focus groups are as much of a potent political tool for gauging what's on voters' minds as ever.

Each participant shared one thing in common when CBS News Consultant and GOP Pollster Linda DiVall asked them, "How many of you consider yourselves to be ticket splittlers?" All of them raised their hands to indicate that they don't tow any party line, and they are blunt when asked questions like: "What do you think of Dick Cheney for vice president?"

Joe, one focus group participant, answered, "If we can't have Colin Powell, then I guess Dick Cheney would have to be the next best thing."

The focus group met the night before Cheney was officially picked. DiVall reviewed some of the other names that were on George W. Bush's veep list: Oklahoma Gov. Frank Keating, Pennsylvania Gov. Tom Ridge and former Missouri Sen. John Danforth.

None of those choices impressed the group. For example, Danforth got a brutally frank reaction.

"Dry, too old and not a strong speaker," said Rita, a focus group member, said about Danforth, most recently the special counsel looking into the U.S. government's role in the 1993 Branch Davidian siege and fire near Waco, Tex.

Gloria, another group participant, said of Danforth: "He needs Geritol."

With the selection of Cheney, another bigger question was raised with the focus group,- this one about Bush himself: "What does it say to you about the type of judgment and decision making that he possesses that he would pick Dick Cheney?"

J.V. replied, "I wrote down that he's willing to add an individual who may be considered to be more qualified for the job than he is."

"I don't think Mr. Cheney did cocaine or got drunk in high school," said Michael, another group member. "It's nice to know there's two guys in the cockpit, at least one of them knows how to fly the plane."

What about other issues with Cheney: His very conservative voting record, his anti-abortion rights stand and his current connection to a Big Oil company? Not problems right now, but this could change as voters learn more about his record.

As for Cheney's past heart attacks, focus group participant Charlotte said, "Lyndon Johnson had a bad heart," referring to the 36th president. "You can't live your life thinking you're going to drop dead any second."

"Is there anybody on the Democratic side that could compete with Dick Cheney?" DiVall asked the focus group members, all of whom shook their heads.

So for Gore, the veepstakes pressure ow is on.