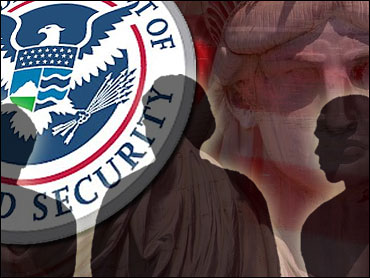 America has an immigration problem. We're not sure precisely what it is, or how to fix it, or if the cure would be worse than the disease. And even if we knew those answers, we're far from reaching a consensus that might, someday, when the political climate is just right, move us toward taking action. But admitting you have a problem is the first step toward recovery. So we've got that going for us.

If you study the numbers charting American immigration, you see a pointillist rendering of modern history. The number of immigrants increased steadily from 1820 until 1855. As our Civil War loomed, immigration dwindled from 427,833 in 1854 to 91,918 at the outbreak of hostilities in 1861. After the war, immigration zoomed ahead, peaking between 1901 and 1910, when 8.8 million immigrants arrived. In 1914, 1.2 million immigrants came to America, seeking an escape before Europe's Great War broke out. The next year, that number fell by 75 percent.

Immigration numbers tell you when times are bad — or good. During the Depression in the 1930s, only 528,431 immigrants made it to America. From 1981 to 2000, the greatest period of sustained growth in American history, 16 million people legally immigrated, the highest two-decade total in American history.

But enough history. Here's where we are today.

From 2001 to 2004, 3.8 million people legally immigrated to the United States. At the same time, a shadow population of illegal immigrants grew at nearly the same rate. Getting a grip on illegal immigration numbers is like trying to grab a handful of sand — it's an imperfect science. But according to Steven Camarota, the director of research at the Center for Immigration Studies, somewhere between 3 million and 5 million illegal immigrants have made their way to America since 2000.

This is both good and bad. It's good because America has historically relied on immigrants to bring energy and dynamism to our society — and because many immigrants are taking low-end, low-wage jobs that native workers find unattractive. It's bad because illegal immigrants may be pushing natives out of the workforce. Again, the scope of the problem is unclear, but the data are disconcerting: In the last five years, the native population has accounted for two-thirds of the increase in America's working-age population — but during the same period, only 9 percent of new jobs for adults went to native workers. Something's going on here.

There's also the matter of security. Global terrorism makes it important for us to know who is coming and going — and makes our porous border particularly troubling. (It's interesting to note that most border talk centers on our southern border, but nearly all of terrorist-related border incidents have come from our northern border.)

Just about half of our recent legal immigrants and about 80 percent of our illegals are from Mexico and the Southern Americas — which means that they come from cultures that share the roots of Western liberalism: monogamy, pluralism, respect for women's legal rights, religious tolerance. The biggest obstacle to cultural acclimation is the language barrier.

That's not nothing, but, still, it could be much, much worse. Demographers note what are called channels of migrations, meaning that particular groups of people tend to migrate to particular destinations for an array of logistical, cultural and social reasons. America gets Hispanics. Europe gets Arab and African Muslims. According to Robert Leiken, the director of the Immigration and National Security Program at the Nixon Center, Muslims comprise "the bulk of immigrants in countries such as Belgium, France, the Netherlands and Spain." The numbers are comparable across the rest of Western Europe, too.

And unlike America's Hispanic immigrants, many Muslim immigrants in Europe have conflicted feelings about the underpinnings of Western liberalism. In France, there are car burnings and clashes about laïcité; in Holland, Islamist immigrants have been making death threats against politicians and public figures; in Denmark, Muslims are unhappy with the idea of a free press; in Sweden, where T-shirts proclaiming "2030 — then we take over" have become popular with Muslim youths, authorities are struggling to deal with the rise of honor killings.

In America, we have fights over bilingual education.

Yes, we have an immigration problem; but, as these things go, we've got it easy.

Jonathan V. Last is online editor of The Weekly Standard and a weekly op-ed contributor to the Philadelphia Inquirer.