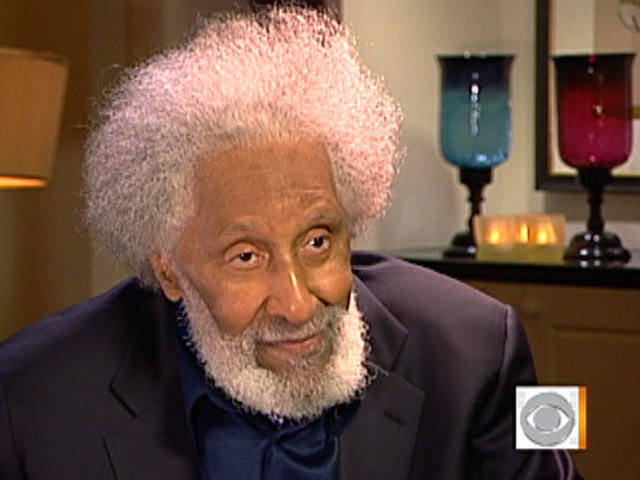 Throughout his legendary career, Sonny Rollins has used his tenor saxophone to help redefine jazz.

Rollins recently sat down with Julie Chen to talk about his adventurous life, and memorable music.

He's been called "The Colossus of the Saxophone."

Indeed, to watch and listen to Rollins, the jazz great appears as if he were a music god -- at once commanding and inspirational.

Born into the cradle of jazz, New York's Harlem, during its golden age, Rollins was raised on the sounds of jazz legends of the time.

"I loved music," he says. "I heard a lot of it when I was in the crib, almost. ... We used to listen to the Apollo theater and we used to hear all the big bands that came to New York. So I sort of imbibed a lot of music when I was a baby. And then, of course, I -- fell in love with the saxophone.

"As a child, I knew that I would be a prominent musician."

How did he know?

"I don't know. I loved the music so much, I think it just consumed me. And I knew that was going to be what I had to do in life."

By 19, Rollins was sharing the stage with his idols, playing New York's nightclub circuit.

What followed were the trappings of fast success and easy access to illegal drugs - a battle with drug abuse, and a stay in prison.

"It's a place that I don't wanna go back to. ... But it was an experience. It was a good experience. I mean, I can look back now and say it was a valuable experience, since I came out of it on top. But, of course, it was difficult."

Rollins says he emerged from prison with renewed purpose. He began playing festivals instead of clubs, before taking a break from it all.

For two years, Rollins stopped performing. Instead he took to rehearsing -- atop New York's Williamsburg Bridge where, he says, "You don't see a lot of foot traffic."

"It was a great experience," he recalls ... almost a religious experience."

His second came four years later. The album, "Without a Song," was inspired by the events of September 11th, 2001.

He heard the first plane.

"I was there," blocks away. "I was in (a) high-rise building. I had to be evacuated, walk down a lotta steps. And I was -- you know, we had to be -- bused to another area out of the zone. And I was really sort of mad in a way.

In March of this year, President Obama awarded Rollins the nation's highest honor for artstic excellence. He accepted with gratitude on "behalf of the gods of music."

And as a new Kennedy Center honoree, Rollins joined them.

Sonny Rollins carried the distinctive sound of American jazz into a new millennium, and has stirred a countless many to follow his path.

Is there no such thing as retiring from what he does, because retiring would be, like - dying?

"And so, retirement is really a death knell for a lot of people, really. So, if you can work, if you can do what you do, do it.

"So, fortunately, at my advanced age, I'm still able to do it."