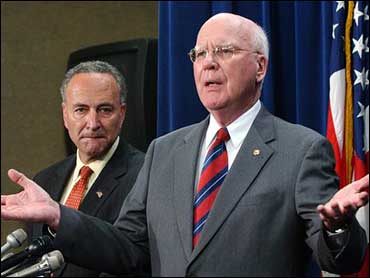 No one was all that surprised when the Bush administration announced Thursday that it would not cooperate with congressional demands for documents and testimony by prominent former officials that would likely confirm this White House's reckless disregard for the rule of law.

What was surprising, and encouraging, was the decisiveness with which key players in Congress responded.

After the White House asserted executive privilege in rejecting subpoenas issued by the House and Senate Judiciary committees as part of the ongoing probe of abuses within the Department of Justice, House Judiciary Chairman John Conyers wasted no time expressing his sense that a Contempt of Congress citation is in order.

"The President's response to our subpoena shows an appalling disregard for the right of the people to know what is going on in their government," explained Conyers, a Michigan Democrat who is the only Judiciary Committee member to have participated in the fight between Congress and the Nixon White House for Watergate-related documents. "At this point, I see only one choice in moving forward, and that is to enforce the rule of law set forth in these subpoenas."

The best way to enforce the rule of law is by issuing a Contempt of Congress citation. The rules of Congress permit standing committees, such as the House and Senate Judiciary panels, to compel witnesses to produce documents and testimony required to complete inquiries. Committee chairs are permitted to issue subpoenas seeking documents and testimony. And when the targets of those subpoenas refuse to cooperate, a Contempt of Congress citation — outlining a criminal offense against the legislative branch of the federal government — can be drawn up.

The issuance of a Contempt of Congress citation would provoke the sort of Constitutional showdown that it now appears will be required if this administration is to be held to account for its abuses of power. In such a showdown between the legislative and executive branches, the third branch of the federal government, the judiciary, would be asked to decide whether the White House has a right to assert executive privilege, as White House counsel Fred Fielding did in a letter telling the committee chairs that their demands would not be met.

The "fear of being commanded to Capitol Hill to testify or having their documents produced to Congress" would prevent presidential advisers from communicating "openly and honestly" with the president," wrote Fielding.

Senate Judiciary Committee chair Patrick Leahy suggests there is another sort of fear in play: the fear of having improper and potentially illegal schemes exposed.

Fielding's assertion of executive privilege came in response to subpoenas for documents and testimony relating to the firing of nine federal prosecutors in 2006. Leahy and members of his committee have explored the question of whether those U.S. Attorneys were dismissed for improper political reasons as part of a broad move by the White House to politicize federal investigations and prosecutions.

"This White House cannot have it both ways," says Leahy. "They cannot stonewall Congressional investigations by refusing to provide documents and witnesses, while claiming nothing improper occurred."

The Vermont Democrat described assertion of executive privilege in an investigation of official misconduct as a "further shift by the Bush administration into Nixonian stonewalling."

"Increasingly," says Leahy, "the president and vice president feel they are above the law — in America no one is above law."

The senator is right, at least in theory.

But, in practice, this administration has operated above, or more precisely outside the law for more than six years. Without proper congressional and judicial oversight, the White House has expanded the reach and authority of the executive branch far beyond the limits imagined by the founders. And it will continue to do so until Congress reasserts itself as a coequal branch of government.

That process begins with the issuance of Contempt of Congress citations.

For the sake of the Republic, those citations cannot be dispatched quickly enough.