At 2:24 p.m. yesterday, White House Press Secretary Robert Gibbs responded to an e-mailed question from CBS News asking if "White House Counsel or anyone else" had suggested that the Oath of Office be re-administered to President Obama.

Gibbs responded that "no one has suggested" that the oath be re-taken.

But at 735 p.m., Mr. Obama was in the White House Map Room with his right hand raised to God re-stating the words of the oath as spoken by the Chief Justice.

Listen To Mr. Obama Retake The Oath Of Office

Gibbs told the handful of print reporters allowed to cover the event that White House Counsel Greg Craig decided the oath should be re-administered exactly as written in the Constitution.

"We believe that the oath of office was administered effectively and that the president was sworn in appropriately" on Tuesday, Craig said in a written statement.

But "out of an abundance of caution, because there was one word out of sequence, Chief Justice Roberts administered the oath a second time."

In other words, Mr. Obama was really the president and didn't need to take the oath again – but just in case, he would do it over – which in golf – is a mulligan.

The president and the chief justice tried to make light of the re-do.

"Are you ready to take the oath," Roberts asked last evening.

Earlier in the day, Craig himself was among those taking the oath of office at a ceremony in the Eisenhower Executive Office Building next door to the White House.

Mr. Obama asked Vice Pres. Joe Biden to administer the Oath of Office to all the new White House staffers in the room.

But Biden first took a poke at the previous day's swearing-in mishap by asking for a copy of the oath.

""My memory is not as good as Justice Roberts," said Biden in a bit of sarcasm directed at the chief justice – whom Biden had voted against during the Senate confirmation process in 2005.

The audience laughed and then groaned. Mr. Obama took pains not to laugh – and was seen to tap Biden on the back as if to say: knock it off.

Biden administered the oath to the staffers without further difficulty. 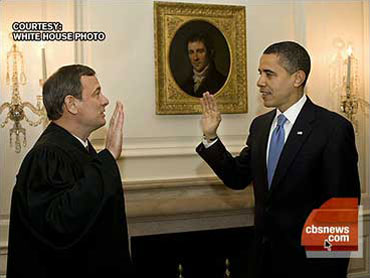