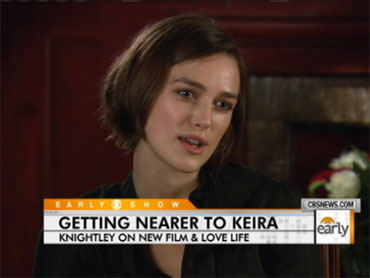 Keira Knightley, radiant star of beautiful films of days gone by is in a new film based on the book by Kazuo Ishiguro, "Never Let Me Go." The film imagines a world of lives cut short under exceptional circumstances.

"Early Show"Special Contributor Amanda Holden spoke to the stunning actress in London where she lives.

According to Holden, the stunning actress says she's a London girl and that she's had a lovely childhood, but Knightley has been a movie star from the age of seventeen. She since made a dozen films. And none of those characters she says are anything like her.

But it is this new horror film -- horror because it fills you with horror, and it has taken her in a whole new direction.

Playing the quintessential English aristocrat, the exquisite Knightley has illuminated costume dramas from to "Pride and Prejudice" to "Atonement" to the billion dollar franchise "Pirates of the Caribbean."

Holden took Knightley to the Chiswick Town Hall, a gothic building in London where they filmed scenes for her sinister new science fiction movie about school children, "Never Let Me Go."

"They're incredibly innocent and you sort of look at this world and you think 'ah how touching, and this is extraordinary, and then you realize the truth," Knightley said.

In the film, modern medicine is taken to chilling extremes. The movie depicts a world in which children are cloned and bred to become organ donors.

"Yeah its frightening, but I think the film is more about humanity's ability to look the other way, I think. You know in fact that if your morals can go out the window if you think you can survive in a certain way, whatever your morals may be," Knightley explained.

There's an uncomfortably funny scene where the teenage characters are all in a café and since they have no experience in the real world, they don't know how to really order food.

Role playing aside, are there ever any moments in Knightley's own life, when she can't function properly?

"Constantly, every day unfortunately...I think again if you're taking the whole film as sort of being a snapshot of everybody's life then that very much is the first time you go into a pub or you're desperately trying to be grown up but you're not actually able to do it and I'm constantly doing that constantly, completely mess up everday things," she admitted.

She also admits that she's clumsy and often trips and falls.

"Oh all the time, I'm wearing high heels today, it's a really bad idea," she said.

Knightley's love life seems rock solid, actually, she's been seen with the actor Rupert Friend, whom she met while filming "Pride and Prejudice" and though she absolutely does not want to talk about him...

"I've just seen a short film made by your real leading man. How is it working together again?" Holden asked.

"I have no idea who you are talking about by the way...no, yeah it was great," Knightley said.

Her beauty and style isn't limited to the silver screen. Earlier this month, Knightley stopped traffic in the street of Paris while filming an ad for Chanel.

She was seen wearing beige leather, helmet, boots, and sitting astride a 1970s Ducati machine.

"It was great fun! It was really good fun and you know I mean how many times can you wear a beige cat-suit by Chanel? It was brilliant," she said.

However, to her dismay, she didn't get to take the cat suit home.

And while no one wears a costume -- any costume better -- Keira Knightley seems casual, comfortable and confident in her own skin.