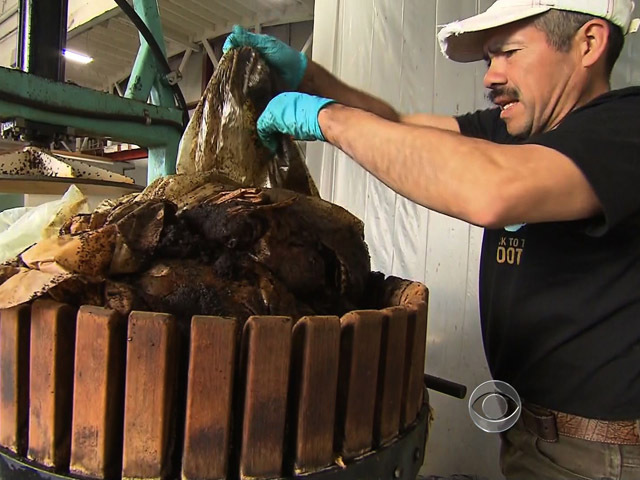 (CBS News) NEW YORK - You know how hard it can be to find a job these days. So when one of our producers came to us with a story about people creating their own jobs, we wanted to know more. CBS News correspondent Jim Axelrod tells us it all started with the germ of an idea and it mushroomed.

Two years ago when Alejandro Velez and Nikhil Arora were about to graduate from the University of California and start looking for work, "urban mushroom farmer" was not a job description they'd ever heard of.

Today they are the mushroom kings of California.

"It gets me up every single morning and keeps me here entertained," said Velez, "excited and pumped to make this a reality."

Reality started out as an experiment in a frat house kitchen. A professor told them it was possible to grow gourmet mushrooms in used coffee grounds. A business was born.

"We just thought it was really cool that you could potentially take waste, turn it upside down and grow some food on it," said Velez. "We knew nothing about mushrooms, nothing about agriculture or farming whatsoever."

Today their company, "Back to the Roots," employs 28 people who collect 40,000 pounds of used coffee grounds a week, dry it on an industrial scale, and manufacture grow kits that are stocked in over a thousand stores including Home Depot and Whole Foods.

"Our main raw material is not only free," said Velez, "but we're making a profit on it. And this year we're projected to do $5 million in sales."

We learned about "Back to the Roots" from Billy Parish, who said: "They've built an amazing business out of coffee grounds."

Parrish featured them in a new book he co-wrote called "Making Good." Parish says it's about more than the mushrooms.

Parish dropped out of Yale to become a climate change activist and runs a solar energy investment company.

"You want do well and you want do good?" asked Axelrod.

"That's exactly it. We think people can have both," said Parrish.

Velez and Arora say they do. Originally planning on conventional careers in finance, today they couldn't imagine being anything but mushroom farmers.

"It really is a result of the last five, 10 years and what we've all seen growing up," said Arora, "seeing the chaos that's resulted from traditional business and then believing there's got to be a better way to do it. I think it's inspiring all of us, our whole generation, to take a different course."

It's a course driven by necessity for a generation looking to find work and meaning in an age of austerity.