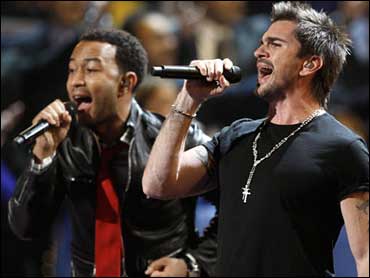 Analysis by Margarita Alarcón, who writes for Cuba Debate

There are efforts underway to turn a potentially positive cultural, perhaps even political event, into a controversy.

Singer/songwriter Juanes (neé Juan Esteban Aristizábal Vásquez) is organizing a "peace" concert September 20 in Havana as a follow up to the one he staged on the border between his native Colombia and Venezuela. He seeks to bring together well known musicians from Latin America, Europe and, he hopes, the United States for this event.

Is there opposition to this concert because Peace without Borders might prove to bridge more than just musical tastes? Cuba already ranks among the world's top three music producers, the others being Brazil and the United States). Surely there can be no objection to exposing the Cuban public to a multitude of pop icons as envisioned by Juanes.

The concept of Peace without Borders is not new. Just a little over a decade ago Alan Roy Scott and Todd Smallwood, two Southern Californians, a concert promoter and an attorney, brought artists from the United States to Havana to participate in what the organizers described as an effort toward "building bridges amongst peoples in conflict." The idea was to randomly pair artists from the United States with Cuban artists. For almost a week the famed Hotel Nacional hosted a bi-national creative workshop that proved music has no borders and its language is universal.

The concept behind Juanes´ Peace without Borders concert in Havana is similar but simpler - he just wants to come down and sing. It's as straightforward as that.

Unfortunately there are those who would like to make it more complicated, more problematic. "Going down to Cuba" often becomes a controversy provoking trip. If you don't trust me, just ask Jackson Browne.

The past 50 years of U.S.-Cuba relations makes the War of the Roses seem like child's play. The animosity roils the mere ninety miles of water separating the two countries. The conflict now resembles an old school Italian vendetta: the kind you see in old mob films or Italian neo realism. And who are the main players in this drama? None other than the old school Cuban American immigrants who left the island way back in the early 1960s and are still holding a grudge

These embittered Cuban-Americans now direct their ire at Juanes and at those who want to join him for the concert in Havana. They hurl negative and insulting accusations at potential participants claiming that bringing their music to the Cuba public is equivalent to propping up a government with which they are at war. It seems that they want to limit the freedom of the Cuban people, censoring the type of music they can listen to.

Olga Tañón, one of Puerto Rico's best known performers felt compelled to write a public letter in response to attacks on her friend and colleague in the music world, Willy Chirino, a Cuban American performer who has not been to Cuba in over 45 years but who came out in defense of the right of Juanes and others to sing in Cuba, if they want to.

When Juanes came up with the idea for this concert, he flew to Cuba, met with a variety of people, talked it through and came to the conclusion that if the Cuban government didn't object such a concert would be the perfect way to help build bridges of understanding.

His actions have opened him up to accusations that border on dementia. They ignore the right of artists to promote their own work. Of course Juanes knows that the concert will bring him publicity but it will also publicize the cause of peace and harmony, elements much needed on both shores of the Florida Straits.