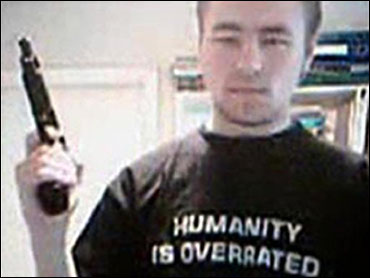 An 18-year-old gunman killed eight people at a high school in southern Finland on Wednesday, then shot himself, police said. The incident came just hours after a video posted on YouTube predicted a massacre at the school. A hospital official said the gunman died of his wounds later that night.

Police said they had the situation "under control" after they surrounded Jokela High School in Tuusula, some 30 miles north of the capital, Helsinki.

The school's principal was among those killed, according to police.

The video shows a still photo of a school that looks like Jokela, which then shatters into many pieces to reveal a tinted red image of a man pointing a gun at the camera.

The video is titled "Jokela High School Massacre - 11/7/2007", and was posted by someone using the name Sturmgeist89, which means "storm spirit", according to Sky.

The video shows a man resembling the individual in the "massacre" clip shooting target practice with a handgun. The video is shot in a wooded area and there is snow on the ground. After taking a number of shots at what appears to be apples, the shooter walks past the camera, smiles and waves.

The postings were later removed.

(CBS)
It was the first known school shooting in Finland, where gun ownership is fairly common by European standards, but shootings are rare.

Kim Kiuru, a teacher at the school, said the principal announced over the public address system just before noon that all students should remain in their classrooms.

"I stayed in the corridor to listen to more instructions having locked my classroom door," Kiuru told the YLE radio station.

"After that I saw the gunman running with what appeared to be a small-caliber handgun in his hand through the doors toward me after which I escaped to the corridor downstairs and ran in the opposite direction."

Kiuru said he saw a woman's body as he fled the building.

More than 400 students, ages of 12 to 18, were enrolled at Jokela, said Heidi Hagman, assistant to the Tuusula municipality director.

Prime Minister Matti Vanhanen described the situation as "extremely tragic" and said the government would hold an emergency meeting.