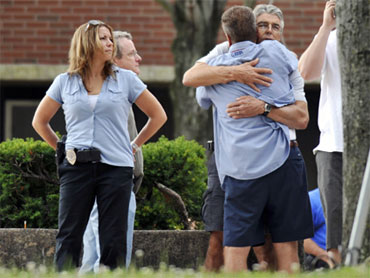 A high-ranking union official says a man who fatally shot eight co-workers and himself at a beer distributorship in Connecticut had been caught on videotape stealing beer. At least two people were also wounded, one critically.

Union officials say Omar Thornton, 34, had worked as a driver for a couple of years and had been called in for a disciplinary hearing Tuesday and asked to resign. He instead opened fire at a warehouse in Manchester, entering the business with a rifle and a red satchel filled with ammunition.

Family members told CBS News affiliate WFSB-TV in Hartford, Conn., that Thornton was a quiet, hard-working man who wasn't a violent person, but was simply pushed to the breaking point by harassment at work.

Thornton's mother, who lives in East Hartford, told WFSB-TV she received a phone call shortly after 7 a.m. Tuesday. It was Thornton.

She said he told her he had shot several people at the beer distribution plant where he worked, and that he planned to take his own life. She said she spent 10 minutes trying to talk to her son, pleading with him to change his mind, but she said she couldn't.

"He said, 'I killed the five racists that was there bothering me,'" Will Holliday, Thornton's uncle, told WFSB-TV. "He said, 'That's it. The cops are going to come in so I'm going to take care of it myself.'"

Holliday said Thornton had been complaining to relatives that in several years he worked at Hartford Distributors he was confronted with blatant racism.

Holliday said, "He had some instances of racism at the company. They were hanging nooses in the bathroom and writing stuff like that. They were singling him out because he was the only black person there in that area."

Teamster official John Hollis said the shooting was perfectly timed for when the most people would be in the building. He said employees were shot both inside and outside the business. He said victims were found throughout the office, warehouse and loading docks.

CBS News Correspondent Ben Tracy reports from Manchester, Conn., that as employees were loading beer onto trucks Thornton ran along the loading platform selectively shooting, killing some and sparing others.

Police found Thornton with a fatal gunshot wound, Manchester police Lt. Joe San Antonio said. A police sharpshooter had approval to fire on Thornton when he killed himself, an official with knowledge of the scene told the AP on condition of anonymity because he was not authorized to discuss it.

The owner of the company was preparing to let Thornton go at the disciplinary hearing when witnesses said "all hell broke loose" Tuesday morning reports WFSB-TV.

Union representatives said among the dead were Brian Cirigliano, the shop steward for the union. Workers said Cirigliano would have been the one to escort Thornton into the building for Tuesday's disciplinary hearing.

Also killed was Craig Pepin, of South Windsor. A family friend of Pepin's said he recently celebrated his wedding anniversary. The friend said Pepin was a soccer coach and was very popular. According to the friend, Pepin loved his job and never had any work-related problems.

Truck driver Victor James was also among the murder victims. James had 30 years on the job, union officials said. Gloria Wilson, James' mother, said he would have turned 60 years old this month. She said he loved his job and was planning on retiring soon. Wilson said James had two grown daughters and four grandchildren.

Thornton called his mother after shooting his co-workers, his girlfriend's mother said.

"He wanted to say goodbye and he loved everybody," said Joanne Hannah, whose daughter Kristi had dated Thornton for eight years.

Hannah described Thornton as an easygoing guy who liked to play sports and video games. She said he had a pistol permit and had planned to teach her daughter how to use a gun.

Thornton had complained to his superiors about harassment, Joanne Hannah said. A picture of a noose and a racial epithet had been hung on a bathroom wall at the beer distributorship, Hannah said. She said her daughter told her that Thornton's supervisors had not responded to his complaints.

"Everybody's got a breaking point," Hannah said, adding that her daughter was with Thornton on Monday night and had no indication he planned the shooting.

James Battaglio, a spokesman for the families who own the distributorship, said he had no immediate information about the allegations of racial harassment. But a union official tells The Associated Press that Thornton had "made no complaint of racism to us or to any federal or state agency."

About 50 to 70 people were in the warehouse during a shift change when the gunman opened fire around 7 a.m., said Brett Hollander, whose family owns Hartford Distributors. Adding to the chaos was a fire at the warehouse, about 10 miles east of Hartford, that was put out. Police did not know whether the fire was related to the shootings.

Among the victims was Hollander's cousin, a vice president at the company who was shot in the arm and the face. Hollander said he thought his cousin would be OK.

"There was a guy that was supposed to, was asked to resign, to come in to resign and chose not to and shot my cousin and my co-workers," Brett Hollander told the AP.

Receptionist Marissa Busiere said she heard another coworker screaming after shots rang out inside the business.

"I worked there for 29 years, lots of friends there," Quattropani said. Quattropani said he went to the business after the shooting because his son now has a summer job there.

A few dozen relatives and friends of the victims gathered a few miles away at Manchester High School. Outside, people talked, hugged and cried. Others talked on cell phones.

And in Connecticut, a state lottery worker gunned down four supervisors in 1998 before committing suicide, and six people were killed in 1974 in botched robbery at a bakery in New Britain. Two men were convicted of that crime.

"Everybody knows the Hollanders as good, generous, upstanding people," Barry said. "They're embedded in the community. Everyone knows Hartford Distributors. They treat their employees very well and they're part of the fabric of the town."

In a statement, Connecticut Gov. M. Jodi Rell offered condolences to the victims' families and co-workers.

"We are all left asking the same questions: How could someone do this? Why did they do this?" she said.