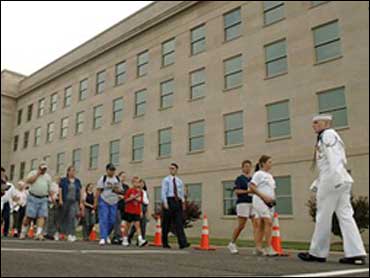 People who lost relatives on Sept. 11, 2001 were at the World Trade Center site Saturday — some of them protesting — and the Pentagon opened its doors for a one-day public tour of the area a plane struck.

Sunday is the fourth anniversary of the terrorist attacks that killed nearly 3,000 people at those sites. Flowers were tucked into the metal fence surrounding the New York site. American flags hung outside nearby office buildings.

New York plans to observe four moments of silence Sunday morning at the times the towers were struck and the times they collapsed.

They're concerned that the International Freedom Center would drain attention from those who died. They said the museum should not be allowed to show exhibits about struggles for freedom around the world. One protester said the center threatens to turn ground zero into a place of endless controversy.

Freedom Center vice chair Paula Berry lost her husband on 9/11. She says others believe a living memorial to preserving freedom should also have a place on, what she agrees is, sacred ground.

At the Pentagon, a quiet and respectful public viewed the spot where a hijacked plane crashed four years ago. The military was allowing the public a tour of the site Saturday.

Previously, only families of victims and groups with reservations were allowed at the site.

The public was allowed to view the rebuilt wall, which includes a blackened stone that was scorched in the crash. They also saw a room with the names of those killed inscribed on black panels.