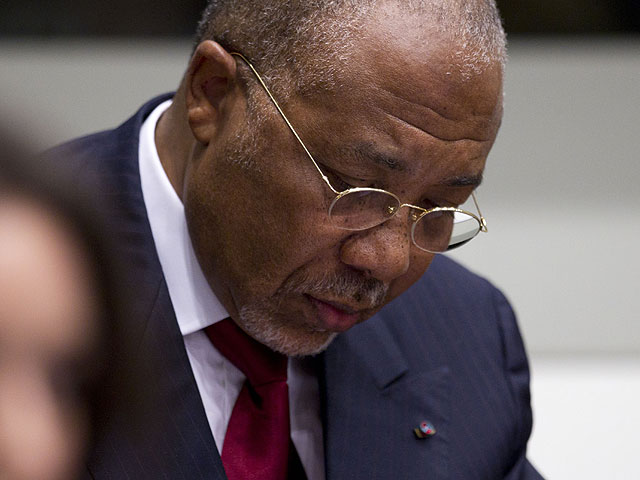 (AP) AMSTERDAM - Former Liberian president Charles Taylor deserves an 80-year sentence for the war crimes he was convicted of last week, including aiding and abetting murder and rape, prosecutors said in a written filing Thursday.

Judges at the Special Court for Sierra Leone on April 26 ruled Taylor played a crucial role in allowing the rebels to continue a bloody rampage during that West African nation's 11-year civil war, which ended in 2002 with more than 50,000 dead. Ten years after the war ended, Sierra Leone is still struggling to rebuild.

They found Taylor guilty of 11 counts of war crimes and crimes against humanity, for his role in arming Sierra Leone rebels in exchange for "blood diamonds" mined by slave laborers and smuggled across the border.

In a written submission Thursday, prosecutor Brenda Hollis said an 80-year sentence would "reflect the essential role Mr. Taylor played in crimes of such extreme scope and gravity." The court does not have the death penalty.

Taylor's conviction, the first of a former head of state since the aftermath of World War II, is seen as a landmark in international war crimes law.

The 64-year-old Taylor will be sentenced on May 30. First the prosecution and defense must submit sentencing recommendations, and oral arguments are scheduled for May 16, including a chance for Taylor to address the court in person.

Taylor fled into exile in Nigeria after being indicted by the court in 2003 and wasn't arrested for three years. And while the Sierra Leone court is based in that country's capital, Taylor's trial was staged in The Hague, Netherlands for fear it could destabilize the region.

During seven months of testimony in his own defense, Taylor insisted he was an innocent victim of neocolonialism and a political process aimed at preventing him from returning to power in Liberia.

Hollis said the scale and brutality of the crimes Taylor helped make possible were such that they impacted "virtually the entire population of Sierra Leone."

"The purposely cruel and savage crimes committed included public executions and amputations of civilians, the display of decapitated heads at checkpoints, the killing and public disembowelment of a civilian whose intestines were then stretched across the road to make a check point, public rapes of women and girls, and people burned alive in their homes," she wrote.

She said there was little room for mitigating circumstances, and the "brutality and impact on the victims should be reflected in Mr. Taylor's sentence."

There was no clear paper trail linking Taylor to rebels, and the three-judge panel hearing his case wound up convicting of aiding and abetting the fighters. He was cleared of even more serious direct command responsibility over the rebels.