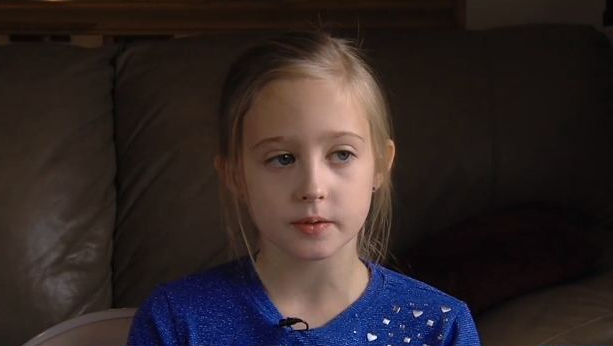 Eight-year-old Chrissy Turner is recovering from a mastectomy for a rare form of breast cancer she found herself.

The surgery on her right breast and lymph nodes, which took place on Monday at Utah's Huntsman Cancer Institute, went well, according to a family Facebook post.

"Our brave little girl on her way home," the post reads. "We are eternally grateful for all of the incredible medical professionals who have, and will continue to be involved in Chrissy's care."

Last month, Chrissy was diagnosed with a very rare form of breast cancer called Secretory Breast Carcinoma. The cancer is so rare that no specialist across the country had ever seen it in a child so young, according to a GoFundMe page set up for the family.

Chrissy discovered the lump herself in October and told her parents, who quickly brought her to the doctor.

After initial assurance from the doctor that almost all tumors in children are benign, Chrissy's parents received the devastating news that it was cancerous.

"You just think, 'I'm going to lose my baby. This is my child, this is my baby,'" Chrissy's mother Annette Turner told CBS affiliate KUTV.

Annette is a cancer survivor herself, diagnosed with a rare form a cervical cancer in 2000 after the birth of Chrissy's older sister, who is now 15. She had the cancer removed through surgery and did not need radiation or chemotherapy.

Fifteen years later, Annette is still cancer free. But in 2008, her husband Troy was diagnosed with non-Hodgkin's lymphoma. His cancer manifested itself in the form of a lump in his armpit, which was already in stage 3 when he reported to his doctors. He is currently in a "watch and wait" stage, visiting the oncologist every three months for a full exam and blood work.

With the family's history, Chrissy's diagnosis was especially difficult to take.

"It's hard," Troy Turner told KUTV. "As hard as it was to tell my kids I had cancer, it was 100 times harder to tell Chrissy she had it."

"There is always the why," Annette said. "When is it enough?"

But the family is staying positive. They thanked family, friends, and supporters from around the world on Facebook. They also said that although the surgery is over, Chrissy still has a long way to go.

"We now have a 'new norm' which will take hold. She will be seeing her surgeon every 3 months to keep a very close eye on her as this type of cancer has a higher recurrence rate than others. And she'll have to undergo reconstructive surgeries throughout her young life to help with her development and her family will be here to love, encourage, and support her with every step!"