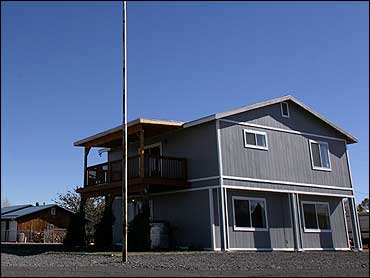 Police in this small eastern Arizona community are looking into the possibility that an 8-year-old boy who is charged with killing his father and another man with a rifle had been abused, the police chief said Saturday.

The boy, who faces two counts of premeditated murder, did not act on the spur of the moment, Police Chief Roy Melnick said.

"I'm not accusing anybody of anything at this point," he said Saturday. "But we're certainly going to look at the abuse part of this. He's 8 years old. He just doesn't decide one day that he's going to shoot his father and shoot his father's friend for no reason. Something led up to this."

A judge determined Friday that there was probable cause to show the boy fatally shot his father, Vincent Romero, 29, and Timothy Romans, 39, of San Carlos, with a .22-caliber rifle.

Under Arizona law, charges can be filed against anyone 8 or older. The judge ordered a psychological evaluation.

"He had no record of any kind, not even a disciplinary record at school," he said. "He has never been in trouble before."

In a sign of the emotional and legal complexities of the case, police are pushing to have the boy tried as an adult even as they investigate possible abuse, Melnick said. If convicted as a minor, the boy could be sent to juvenile detention until he turns 18.

Police had responded to calls of domestic violence at the Romero home in the past, but authorities were searching records Saturday to determine when those calls were placed, Melnick said.

"We're going to use every avenue of the law that's available to us, but we're also looking at the human side," he said.

Melnick said officers arrived at Romero's home within minutes of the shooting Wednesday in St. Johns, which has a population of about 4,000 and is 170 miles northeast of Phoenix. They found one victim just outside the front door and the other dead in an upstairs room.

Romans had been renting a room at the Romero house, prosecutors said. Both men were employees of a construction company working at a power plant near St. Johns.

The boy went to a neighbor's house and said he "believed that his father was dead," Carlyon said.

Melnick said police got a confession, but the boy's attorney, Benjamin Brewer, said police overreached in questioning the boy without representation from a parent or attorney and did not advise him of his rights.

"They became very accusing early on in the interview," Brewer said. "Two officers with guns at their side, it's very scary for anybody, for sure an 8-year-old kid."

Prosecutors aren't sure where the case is headed, Carlyon said.

"There's a ton of factors to be considered and weighed, including the juvenile's age," he said. "The counterbalance against that, the acts that he apparently committed."

FBI statistics show instances of children younger than 11 committing homicides are very rare. According to recent FBI supplementary homicide reports, there were at least three such cases each year in 2003, 2004 and 2005; there were at least 15 in 2002. More recent statistics weren't available, nor were details of the cases.

Earlier this year in Arizona, prosecutors in Cochise County filed first-degree murder charges against a 12-year-old boy accused of killing his mother.

Defense attorney Mike Piccarreta, who is not involved in the latest case, said that each case has to be considered on its own merits, but that it would be hard for him to comprehend that an 8-year-old has the mental capacity to understand the act of murder and its implications.

"If they actually prosecute the guy, it's a legal minefield," he said. "And, two, society has to make a decision as to whether they want to start using the criminal justice system to deal with 8-year-olds. That doesn't mean you don't have a troubled kid."

Wednesday's homicides were the first in at least four years in the community, where most people know one another, Melnick said.

Romero had full custody of the child. The boy's biological mother visited St. Johns during the weekend from Mississippi and returned to Arizona after the shootings, Carlyon said.

Brewer said the boy "seems to be in good spirits.