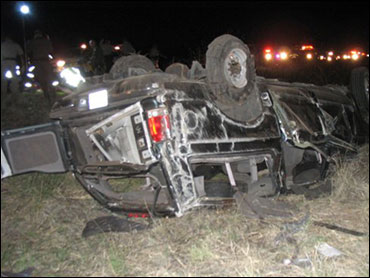 Eight undocumented immigrants "stacked like wood" in the back of a sports utility vehicle crammed with at least 22 people were killed when the driver lost control and rolled over on a remote southern Arizona highway, authorities said Sunday.

The Ford Excursion had no rear seat and most of the men and women were ejected when the SUV crashed just before midnight Saturday near Sonoita, about 40 miles southeast of Tucson.

Five survivors were airlifted to a Tucson hospital and 14 people were transported to hospitals in Tucson and Sierra Vista. The U.S. Border Patrol said eight men treated and released from the hospitals were in custody.

State authorities originally reported 10 people were killed but later lowered the number after learning two people were in the hospital with life-threatening injuries, not dead.

Authorities said all the victims are believed to be undocumented immigrants from El Salvador, Guatemala, Honduras, Equador and perhaps Mexico.

Arizona Department of Public Safety spokeswoman Joy Craig told The Associated Press that the remote area where the crash happened is a route commonly used by those smuggling illegal immigrants into the U.S.

"We see the people stacked like wood frequently," she said. "If they had had the right number of people in there and they all had their seat belts on, they would have lived."

The identity of the driver, passengers and the vehicle's owner were being withheld pending their identification and notification of relatives. Many victims did not have ID, Craig said.

Investigators have not identified the driver, but if he survives, Craig said he would likely be charged.

"Basically, this is like a 10-time homicide scene," she said.

Craig could not confirm reports of five victims who fled the crash scene and sought help from a Sonoita gas station.