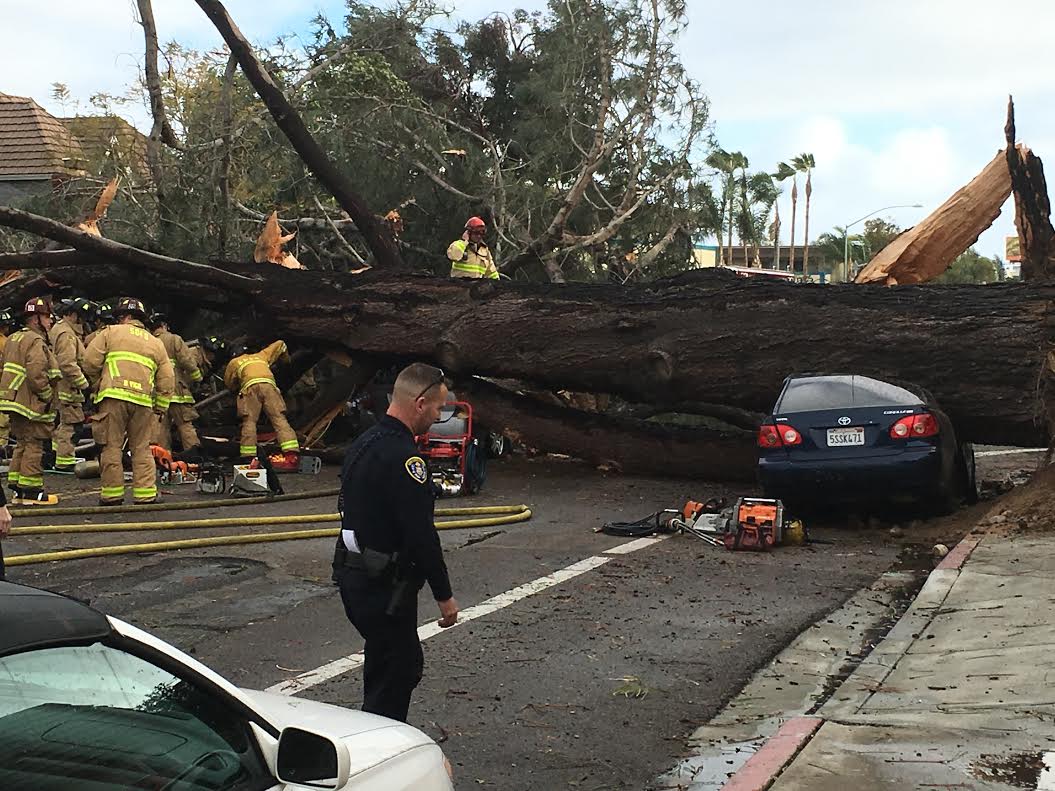 SAN DIEGO - A California motorist had the worst of luck Sunday when a giant 8-foot-diameter tree was toppled amid high winds brought on by a winter storm, landing on the passing driver.

CBS affiliate KFMB in reports the oak tree fell across all four lanes of the street, crushing four cars, including the small Honda sedan containing the victim, whose identity is being withheld. Firefighters worked to remove the victim's body from the crushed car more than two hours after the tree toppled on it.

San Diego Fire and Rescue Capt. Joe Amador said: "To the people out here dealing with the rain: be careful, drive slowly and arrive alive."

Strong winds downed dozens of trees and power poles and ripped off rooftops - and in one case, solar panels - across Southern California.

Wind gusts topped 50 mph in the San Diego area and 65 mph in Malibu, according to the National Weather Service. The highest reading of the day was at Whitaker Peak, north of Castaic, where a gust was recorded at 115 mph.

The storm also dropped up to an inch of rain in some places by 4 p.m. Sunday, and forecasters said up to 2 inches of rain was expected in the valleys of Los Angeles County and as many as 3 inches possible for southwest-facing foothills and mountains.

A flash flood watch was issued for foothill neighborhoods underneath wildfire burn areas, triggering fears of possible mudslides and debris flows. The threat subsided by late Sunday as the storm moved out of the area.

Blinding rain briefly brought traffic to a near-standstill on LA freeways. North of the city, a crash during a heavy downpour involving two trucks closed southbound lanes of Interstate 5 near the Grapevine. There were no immediate reports of injuries.

The weather service said the highway corridor will receive 3 to 7 inches of snow by Monday morning and vehicles may be required to travel with tire chains.

The storm also churned up high surf along west and northwest-facing beaches. The rough seas prompted authorities to close the piers at Redondo Beach and Manhattan Beach.

To the north, Interstate 80 near Truckee was closed for more than two hours after 29 vehicles got into a pileup amid snowy conditions, KCRA-TV reported. Flooding created an ice dam that forced the closure of a mountain road, cutting off several hundred residents of Serene Lakes, a community in the Donner Summit area of the Sierra Nevada, Nevada County officials said.

Another rain storm was expected in the San Francisco Bay Area by Sunday evening. A wind advisory was issued warning of winds gusting up to 50 mph.