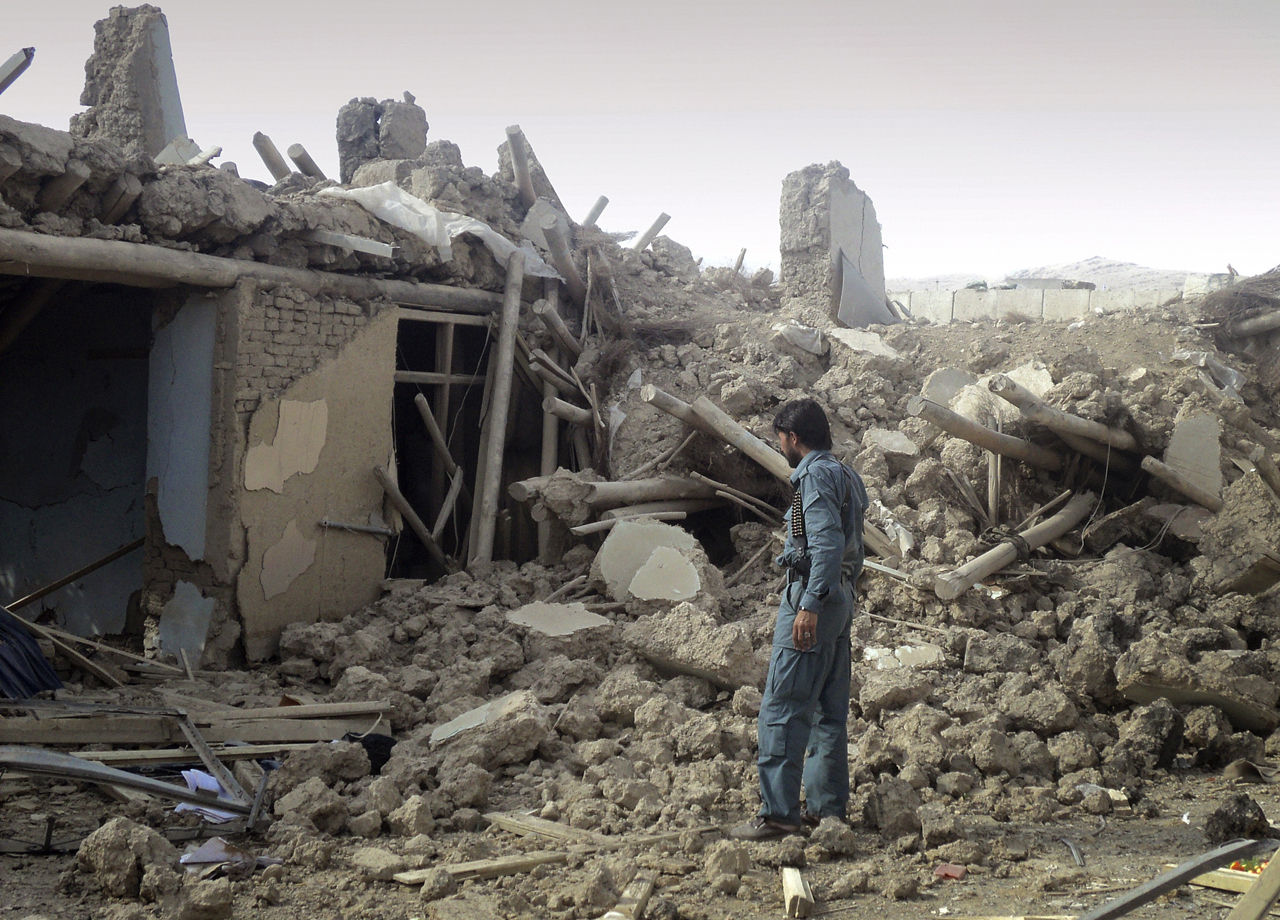 A powerful Taliban truck bomb that wounded 77 American soldiers and killed five Afghans outside a combat outpost served as a reminder on Sunday that 10 years after the Sept. 11 attacks, nearly 100,000 U.S. troops are still fighting a war that shows no signs of slowing down.

No U.S. troops were killed when the massive bomb loaded on a truck filled with firewood exploded Saturday night just outside the gates of Combat Outpost Sayed Abad in eastern Wardak province. NATO said a protective barrier at the entrance absorbed most of the force of the blast, although the area outside the base was hit hard.

Officials said the Afghans killed included a policeman and four civilians, including a 3-year-old girl. Another 17 Afghans — 14 civilians and three policemen — were wounded. The provincial governor said the blast was so powerful it damaged about 100 shops in the nearby Sayed Abad bazaar.

Although Saturday's truck bombing occurred outside the base, the numbers of injuries it caused was significant. Combat outposts usually house about 200 troops.

The Taliban claimed responsibility for the attack. Earlier, they had issued a statement vowing to fight until all foreign troops leave. The radical Islamic movement, which gave shelter to Osama bin Laden and al Qaeda when it ruled Afghanistan, also stressed that it had no role in the Sept. 11 attacks, and it accused the U.S. of using them as a pretext to invade the country.

"The Afghans have an endless stamina for a long war," the statement said. "Through a countrywide uprising, the Afghans will send the Americans to the dustbin of history like they sent other empires of the past."

The attack occurred just over 40 miles, or about an hour's drive, from Kabul in an increasingly lawless district in a key province that controls a strategic approach to the capital.

Sayed Abad is seven miles east of the Tangi Valley, where the Taliban on Aug. 6 shot down a U.S. military helicopter, killing 30 Americans. Many of the dead belonged to the U.S. Navy's SEAL Team 6 — the same elite unit that killed bin Laden during a May 2 cross-border raid into Pakistan, where al Qaeda's leadership was driven. It was the deadliest single loss for American forces in the decade-old war.

"Some back home have asked why we are still here," U.S. Ambassador Ryan Crocker said at a 9/11 memorial at the embassy in Kabul. "It's been a long fight and people are tired. The reason is simple. Al Qaeda is not here in Afghanistan, and that is because we are. "

"We're here so that there is never again another 9/11 coming from Afghan soil. We, with our Afghan partners, figured out that the best way to ensure that is to work together and with the international community for a stable, secure, democratic Afghanistan."

The Taliban continue to launch regular attacks and orchestrate assassination campaigns against those allied with the government. In addition to the attack in Wardak on Saturday, 10 Afghan civilians were killed in two separate roadside bombings.

Two Afghan security guards were also killed late Saturday when an insurgent rocket slammed into a part of the sprawling U.S. base at Bagram air field outside Kabul, the U.S. military said. Two NATO service members and two Afghans were slightly wounded.

NATO also said Sunday that one of its service members was killed in an insurgent attack a day earlier in eastern Afghanistan. That brought the death toll to 13 this month — and 417 this year — for coalition forces. At least 307 of the dead were Americans, and despite U.S. reports of progress on the battlefield the number of troops dying this year is at about the same level as 2010.

While the overall international death toll dropped by 14 percent in the first half of the year, the number of Americans who died remained virtually unchanged, 197 this year compared with 195 in the first six months of last year, according to a tally by The Associated Press.

In a midyear report last July, the U.N. said 1,462 Afghan civilians also lost their lives in the first six months of this year in the crossfire of the battle between Taliban insurgents and Afghan, U.S. and NATO forces. During the first half of last year, 1,271 Afghan civilians were killed.

The United States and its allies invaded Afghanistan on Oct. 7, 2001, after the Taliban, who then ruled the country, refused to hand over Osama bin Laden.

The late al Qaeda leader was at the time living in Afghanistan, where the terror network had training camps from which it planned attacks against the U.S. and other countries.

Although the Taliban were swiftly driven from power by the U.S.-led coalition, they managed to use the years of the Iraq war — when America focused its military strength on the conflict against Saddam Hussein — to regroup, rearm and reorganize.

They began winning back ground lost to the international military coalition until President Barack Obama decided to send in 30,000 more troops last year to help.

The U.S. has begun withdrawing some of its 100,000 troops from Afghanistan and will send home 33,000 by the end of next year. The international military coalition has already begun transferring security responsibilities to newly trained Afghan forces with the aim of removing all their soldiers by the end of 2014.

"We are and will remain committed to Afghanistan and the region," Crocker said. "We are in this for the long haul. We are transitioning security responsibility to Afghan forces, but transition does not mean disengagement."

Commemoration ceremonies were held at many U.S. and NATO military bases around the country.

Although the coalition has made some gains in the Taliban's traditional southern strongholds, violence has not abated around the country.

The battle against al Qaeda also has spread across the border with Pakistan, where a suspected U.S. missile strike on a house Sunday killed three people in an al Qaeda and Taliban safe haven along the frontier, Pakistani intelligence officials said. They spoke on condition of anonymity because they were not authorized to talk with reporters.

The United States has fired scores of missiles into northwest Pakistan since 2008, trying to keep al Qaeda operatives there on the run.