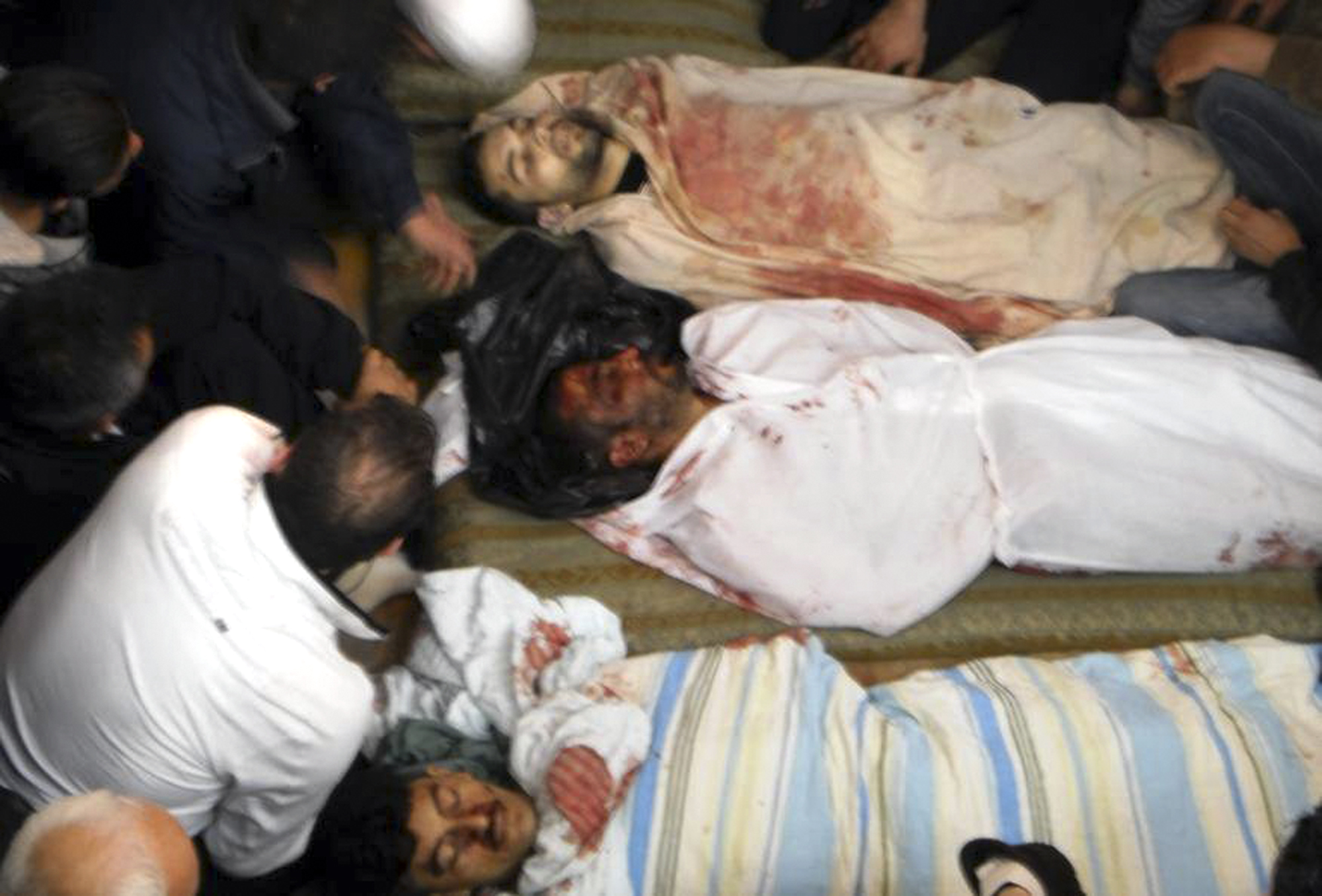 BEIRUT - Syrian security forces fired bullets and tear gas Friday at tens of thousands of protesters across the country, killing at least 75 people in the bloodiest day of the monthlong uprising and signaling that the authoritarian regime was prepared to turn more ruthless to put down the revolt against President Bashar Assad.

Among the dead were a 70-year-old man and two boys ages 7 and 10, Amnesty International said. In the southern town of Izraa, a man ran carrying the body of a young boy, whose hair was matted with blood from a gaping wound on his head, as another child wept and shouted, "My brother!" Footage of the scene was posted on the protest movement's main Facebook pace.

In other towns, protesters scattered for cover from sniper bullets, then dragged corpses through the streets. Mobile phone images showed the bodies lined up on the floor inside buildings.

The rallies, most marching out from mosques after Friday's noon Muslim prayers, erupted in towns and cities stretching along the breadth of the country, including in at least two suburbs of the capital, Damascus.

The death toll was likely to rise, raising fears that there will be an explosion of violence Saturday as relatives bury their dead in funerals that in the past have turned into new protests. Ammar Qurabi, head of Syria's National Organization for Human Rights, said another 20 people were missing.

Friday's toll was double that of the previous deadliest day of the uprising, on April 8, when 37 were killed around the country. The heavier crackdown came after Assad warned a week ago that any further unrest would be considered "sabotage" after he made the gesture of lifting long-hated emergency laws, a step he ratified on Thursday.

The emergency laws gave the regime a free hand to arrest people without charge and extended the state's authority into virtually every aspect of Syrians' lives, reports CBS News' George Baghdadi.

It was a clear sign that regime was prepared to escalate an already bloody response, with nearly 300 already dead in more than five weeks. Previously, Assad has mixed the crackdown with gestures of reform in a failed attempt to deflate the protests.

The bloodshed so far has only served to invigorate protesters whose demands have snowballed from modest reforms to the downfall of the 40-year Assad family dynasty. Each Friday, growing numbers of people in multiple cities have taken to the streets despite the near certainty that they would come under swift attack from security forces and shadowy pro-government gunmen known as "shabiha."

"Bullets started flying over our heads like heavy rain," said one witness in Izraa, where police opened fire on protesters marching in front of the mayor's office. The town is located in southern Daraa province where the uprising kicked off in mid-March.

In Washington, President Obama condemned the latest use of force by Syria against anti-government demonstrators and said the regime's "outrageous" use of violence against the protesters must "end now."

In a statement, Mr. Obama said Syria's moves to repeal a decades-old emergency law and allow peaceful demonstrations were not serious in light of Friday's events.

He called on Assad to change course and obey the will of his people by giving them what they seek -- freedom of expression, association, peaceful assembly and the ability to choose their leaders.

Tens of thousands marched Friday in the Damascus suburbs of Douma and Hajar Aswad, the central cities of Hama and Homs, Latakia and Banias on the coast, the northern cities of Raqqa and Idlib, the northeastern Kurdish region, and in Daraa, witnesses said.

Security officials fired on protesters in Homs Tuesday, where people had a day earlier held funerals for demonstrators shot and killed by police. At least one person was killed, reports The Washington Post.

It was certainly one of the most robust gatherings to date, but it was difficult to gauge whether turnout was larger than heavy demonstrations a week ago. Because the protests were so quickly and violently dispersed Friday, it appeared that many gatherings were broken up before the masses hit the streets.

Amnesty International put the day's death toll at 75, mirroring reports from witnesses to The Associated Press.

Friday's witness accounts could not be independently confirmed because Syria has expelled journalists and restricted access to trouble spots. Witnesses spoke on condition of anonymity for fear of reprisals.

As it has stepped up its response, Assad's regime has seemed little affected by mounting international concern over the violence.

White House spokesman Jay Carney said the U.S. calls on the Syrian government "to cease and desist from the use of violence against peaceful protesters" and to "follow through on its promises and take action toward the kind of concrete reform that they've promised."

In the U.K., Britain's Foreign Secretary William Hague condemned the "unacceptable killing of demonstrators by the Syrian security forces."

"I call on the Syrian security forces to exercise restraint instead of repression, and on the Syrian authorities to respect the Syrian people's right to peaceful protest," Hague said.

The protest movement has been the gravest challenge against the autocratic regime led by Assad, who inherited power from his father 11 years ago in one of the most rigidly controlled countries in the Middle East.

The uprising in Syria takes its inspiration from the popular revolts that toppled the leaders in Egypt and Tunisia. But Syria is a highly unpredictable country, in part because of its sizable minority population, the loyalty of the country's military and the regime's web of allegiances to powerful forces including Lebanon's Hezbollah and Shiite powerhouse Iran.

Serious, prolonged unrest in Syria would almost inevitably hurt Hezbollah and weaken Iran's influence in the region. But it is not at all clear what would come next if a power vacuum emerges in Syria.

The country has multiple sectarian divisions, largely kept in check under Assad's heavy hand and his regime's secular ideology. Most significantly, the majority of the population is Sunni Muslim, but Assad and the ruling elite belong to the minority Alawite sect, an offshoot of Shiism.

Assad has exploited fears of sectarian warfare -- so apparent in neighboring Iraq and Lebanon -- by blaming the unrest on a "foreign conspiracy" and armed thugs trying to sow sectarian strife.

On Friday, the state-run news agency SANA said masked gunmen on motorcycles opened fire on the guards of a government office in Izraa, killing eight bystanders. SANA also said two members of the security forces were killed "by armed criminal groups," one in the Muadamiya district of Damascus, the other in the Baba Amr district of Homs.

There was no way to independently confirm the account.

The U.N. chief reiterated his call for "an independent, transparent and effective investigation into the killings" and reminded Syrian authorities of their obligation to respect international human rights including the rights to freedom of expression, peaceful assembly and freedom of the press, Nesirky said.

Besides the government crackdown, Assad has been trying to defuse the protests by offering a series of concessions, granting citizenship to thousands among Syria's long-ostracized Kurdish minority, firing local officials, releasing detainees and forming a new government. The recent lifting of emergency laws -- which gave authorities almost boundless powers of surveillance and arrest -- had been a top demand.

But many protesters said the concessions have come too late -- and that Assad does not even deserve the credit, because the protest movement is forcing his hand.

The true strength of the protest movement is still murky because the uprising is so loosely organized. To be sure, the protests have expanded in numbers and to more parts of the country.

But there are no organized, credible opposition leaders who can rally followers on the ground or be considered as a possible successor. No political parties other than the Baath Party are allowed in Syria, and almost all opposition figures have been either jailed or exiled.

Still, many young activists are not deterred by the uncertain future.

"This is no reason to stick with this alternative for life," said one activist in Banias, asking that his name not be used for fear of reprisals. "Syria has many qualified people who were never given a chance."