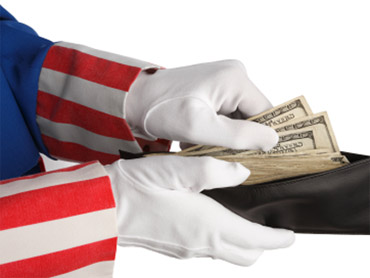 More than 89,000 stimulus payments of $250 each went to people who were either dead or in prison, a government investigator says in a new report.

The payments, which were part of last year's massive economic recovery package, were meant to increase consumer spending to help stimulate the economy.

But about $18 million went to nearly 72,000 people who were dead, according to the report by the Social Security Administration's inspector general. The report estimates that a little more than half of those payments were returned.

An additional $4.3 million went to more than 17,000 prison inmates, the report said. Most of the inmates, it turns out, were eligible to get the payments because they were newly incarcerated and had been receiving Social Security before they were locked up.

In all, the $250 payments were sent to about 52 million people who receive either Social Security or Supplemental Security Income, at a cost of about $13 billion. Other federal retirees also received the payments, but they were not part of the inspector general's review.

The inspector general for the Social Security Administration has been performing an audit to make sure no checks went to ineligible recipients. The latest report was dated Sept. 24 but was just recently posted to the agency's website.

People were eligible for payments if they were getting benefits during any one of the three months before the law was passed in February 2009.

Dead people were ineligible to get the payments. But, the report said, there is no provision in the law to recover payments incorrectly sent to dead people.

"Based on the failure of the SSA to properly check its records, and Congress' failure to fully think through the provisions needed to govern these payments, SSA lost $22.3 million in American tax dollars," said Sen. Tom Coburn, R-Okla. "These findings are yet another example of congressional stupidity and a lack of accountability."

The Social Security Administration said that despite tight deadlines, workers accurately processed more than 99.8 percent of the 52 million stimulus payments.

"We worked with Treasury, developed new processes, and began issuing (payments) about 30 days earlier than the legislatively mandated deadline," the agency said in a written response included in the inspector general's report. "This was a major accomplishment for our agency."

The inspector general's report said that if similar payments are authorized in the future, prison inmates should be ineligible and the government should be able to recover payments made to dead people.

The Social Security Administration agreed with the recommendations.