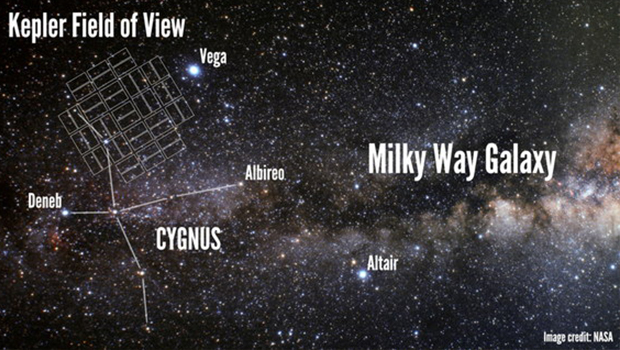 Stars with Earth-like planets may be the rule rather than the exception, scientists announced Monday. Data collected by NASA's Kepler space telescope indicates one in five sun-like stars in the Milky Way galaxy likely hosts an Earth-size planet in the habitable zone where life as it is known on Earth can, in theory, exist.

Put another way, Kepler data show 70 percent of the galaxy's 200 billion stars appear to host planets and that one in five of those likely has at least one Earth-size planet orbiting at a distance where temperatures are benign enough to allow water to exist on the surface or in an atmosphere.

Kepler was designed to detect planets by measuring minute changes in a star's light that might indicate the passage of a planet passing in front as viewed from Earth. To detect Earth-size planets in Earth-like orbits, at least three years of observation were required to confirm a discovery.

Last January, Kepler's scorecard, based on analysis of two years worth of data, stood at 2,740 planet candidates. As of Monday, adding in analysis of a third year of observations, the total jumped to 3,858 candidates, including 647 that are twice the size of Earth or smaller.

Ten of those worlds were found in habitable-zone orbits.

Erik Petigura, a graduate student at the University of California at Berkeley, carried out a complex statistical analysis of Kepler data that allowed him to extrapolate how many Earth-size planets might orbit sun-like stars across the entire galaxy.

"We began by asking a simple question: what fraction of stars have a planet similar to Earth?" he said during a news conference. "Today, I'm happy to report that 22 percent of sun-like stars harbor a planet in the habitable zone, that is, a planet that is between one and two times the size of the Earth and is bathed in a similar amount of stellar intensity as the Earth is."

He said the Kepler data indicate "that planets seem to be the rule rather than the exception. And that's only out to orbital distances similar to that of the Earth. That doesn't even include smaller planets (like Mars) that could be farther away from those suns than the Earth. So whatever the number is, it's in the hundreds of billions."

Asked to speculate about the likelihood of life elsewhere in the Milky Way based on the sheer number of presumed Earth-size planets, William Borucki, the Kepler principal investigator at NASA's Ames Research Center, said more observations by follow-on spacecraft will be needed to provide a definitive answer.

"Planets with CO2 (carbon dioxide) and water vapor, which is what you need for life, I think we'll find are probably fairly common in our galaxy," he said. "That's certainly speculation at this point. We need to go out and make those measurements so we're not guessing."

Trailing the Earth in its orbit around the sun, the spacecraft focused its 95-megapixel camera at a patch of sky the size of an out-stretched hand that contains more than 4.5 million detectable stars. Kepler monitored the light from more than 100,000 of those suns.

By studying subtle changes in brightness from such planetary transits, along with the timing of repeated cycles, computer analysis can sift out clear signs of orbiting planets.

Large planets in close orbit around their stars were relatively easy to find. But to confirm Earth-like worlds in habitable zone orbits, Kepler needed to make repeated observations over three to four years, or orbits.

Earlier this year, the spacecraft was hobbled by the failure of a second stabilizing reaction wheel, preventing the pointing accuracy required for planet detection. But scientists now have four years of observations in hand, including a full year's worth that have not yet been analyzed.

By the time astronomers plow through the remaining data, many more planets are expected to be found, including many more smaller worlds.

"We're celebrating opening a new era in astronomy, we're beginning the exploration of our galaxy," Borucki said. "We've already learned about 70 percent or more of the stars we're examining show evidence of planets. Many of them show planetary systems.

And Kepler has only searched 1/400th of the sky.

"Imagine what (future) missions will find as we continue that exploration," Borucki said.

Women and children first? Not quite, says report

How GPS watches can put kids in harm's way