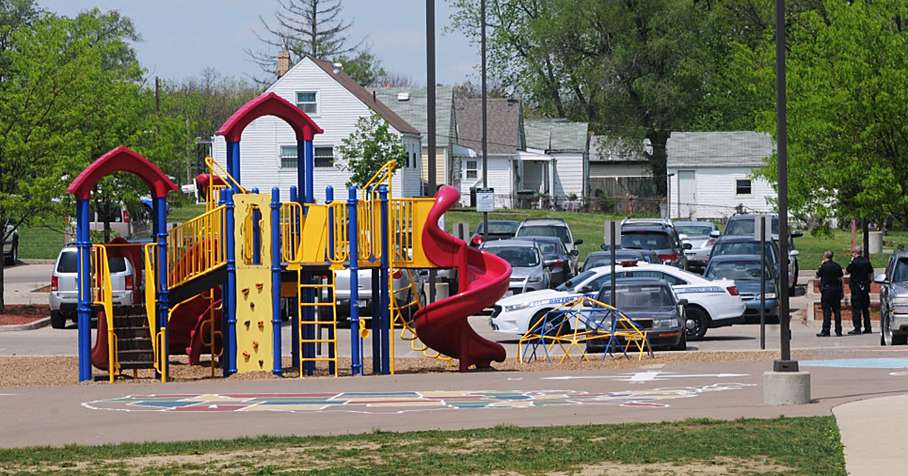 Dayton police said Friday evening they were still searching for a suspect who ran from the World of Wonder school following the afternoon attack. They said officers had unsuccessfully tried to track him with a police dog and canvassed the neighborhood.

Police described the suspect as a black man estimated to be 18 to 20 years old and a little less than six feet tall, wearing athletic shorts and a beige or green sweatshirt over an orange shirt.

A motive for the stabbing wasn't clear. Police didn't publicly identify the victim, who initially had been reported to be an eight-year-old girl.

Dayton schools spokeswoman Jill Moberley told CBS affiliate WOIO that the security guard who is usually in the school wasn't there Friday. She said two guards quickly responded to the scene from a high school two blocks away.

In a note to parents of World of Wonder students after the attack, Principal LaDawn Mims-Morrow said the school will have counselors available to students on Monday as needed and will have extra security when the children are outdoors during the coming schooldays, the Dayton Daily News reported.

The school was put on lockdown after the attack, then dismissed for the rest of the day.

According to WOIO, the school is in an area that struggles with crime issues, and the school's mission and vision statements both mention a commitment to a "safe learning environment."

According to crime reports on the Dayton Police website, there have been 26 violent crimes within a half-mile of the school in the past two months -- one murder, six aggravated assaults, three robberies, three menacing reports and 13 simple assaults.

James Frusher III works nearby on Gettysburg Avenue and acknowledged that "of course this is a high-crime area."

"For this neighborhood, when something happens in the news or something bad, it's usually shootings or drug-related and adults, you know?" Frusher told WOIO. "You don't hear about grown men running up and stabbing children. That's a whole new level of crime.... It's astonishing. ... It makes you sick."

The area around the World of Wonder is tough, but there are residents who look out for the neighborhood and their neighbors.

A man mowing grass for a resident across from the school's main entrance gathered his lawnmower, gardening shears and a weed trimmer and made his way down Oakridge Drive. He identified himself only as "the electrician," and said he mows the lawns of abandoned homes.

There are two visibly abandoned houses on the block around the school, but the Residence Park neighborhood has much more significant issues with blight.

A 2014 Dayton Daily News story about "nuisance properties" listed 16 Dayton streets with at least 20 blighted properties. Seven of those streets are within a quarter-mile of World of Wonder, including Oakridge and Kammer, which bracket the school to the north and south.