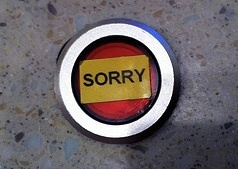 I believe that apologies are woefully underused in professional communication. Hyper-sensitivity to liability, finger-pointing, entitlement, and a lack of accountability drive good people to avoid acknowledging mistakes, let alone apologizing for them. This resistance to apologizing does all sorts of bad things professionally. The longer issues are left unaddressed, the deeper the resentment and the harder it is to move forward.

-- Apologies take the energy out of conflicts

-- Apologies separate time into past and future, problem and resolution

Believe it or not, there are lots of bad ways to apologize. A few examples of what not to say:

-- "There's lots of blame to be spread around here."

Here are guidelines on how to make a professional apology:

1. Separate the apology and the explanation -- The apology has to stand on its own. I know you want the other person to understand your intentions, the circumstances under which things happened and, most important, that it is not all your fault. However, he or she cannot hear this at the same time as the apology. They will hear the explanation (read: "excuses and accusations"), rather than the apology. Instead, just apologize. Get clarity that you have apologized, and make no explanations or excuses until the apology has been accepted.

2. Ask for the discussion, but don't insist upon it -- "If you would like to discuss the circumstances around this so we can work on avoiding issues in the future, I'm open to it, but it's not necessary. I want to move forward." This invitation puts the ball into the other person's court and allows for the discussion to be invited rather than forced. If they don't want to discuss, don't push it.

3. One-up the connection -- If you can, you want to move the connection method for the apology to its highest level. Face-to-face is best, but GoToMeeting or Skype is second, then phone, then letter and finally email. The point is that professional apologies are still personal.

4. Don't assume you know what will make it right, but be prepared with options -- If the issue that requires the apology also requires some resolution, ask what the other person believes will "make this right." Have options ready, but don't offer them first. Instead, ask and consider what they have suggested.

5. Own more than your portion -- When mistakes are made or offenses given, there is a tendency to get to a 50/50 assignment of responsibility. You have to own your entire portion without seeking them to own theirs. This usually means owning the entire problem in your apology. Remember, one of the things you are trying to do is get past this point in the business relationship. You won't accomplish that doing "guilt fractions."

6. Focus on what happens next -- Close out the issue with the person and then move to immediate next steps. Time may heal, but action accelerates it.

7. Move on -- There is no sense in hanging onto this issue or walking on eggshells. If you have given the apology and it has been accepted, then you need to keep moving. If the other person chooses to bring the issue up again, simply state, "When I apologized and you accepted it, I considered the matter closed."

Professional apologies allow companies and people to resolve issues, change the direction of a relationship and move forward. If you are looking for "justice" in your professional relationships, I think you are destined for disappointment. I encourage you to be satisfied with resolution and move on.