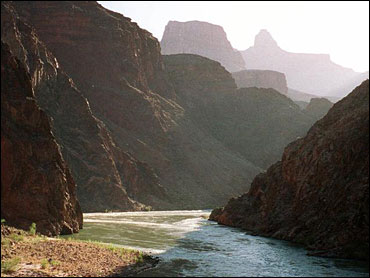 More than 30 million people in California, Arizona, Nevada, Wyoming, Utah, Colorado and New Mexico are affected by the historic agreement.

A key element of the drought plan lets the lower-basin states of California, Nevada and Arizona use the vast Lake Mead reservoir behind Hoover Dam to store water they conserve or don't need for use later.

For the Metropolitan Water District of Southern California, that arrangement could mean storing almost 1.5 million acre-feet of conserved water in the lake, said Timothy F. Brick, the chief of the MWD board. The district is the water wholesaler to 26 cities and water districts serving some 18 million people.

"This landmark new plan will help California recover some of the water reliability that Mother Nature has taken away during the eight years of record drought," Brick added.

The plan specifies how and when agencies in each state will face reductions during drought, and set new rules allowing the reservoirs of lakes Powell and Mead "to rise and fall in tandem, thereby better sharing the risk of drought," Kempthorne said.

The agreements also establish rules for handling surplus water in times of plentiful runoff, and they encourage water conservation.

"It's easy to be gracious when you have a surplus," Kempthorne said. "It is far tougher in a time of scarcity."

Another agreement lets the Las Vegas-based Southern Nevada Water Authority build a reservoir just north of the U.S. border in California to capture excess water that would otherwise flow into Mexico.

In return for funding the project, expected to cost more than $175 million, Las Vegas will be allowed to draw up to 400,000 acre-feet of water to slake the thirst of a fast-growing region that has reached the limit of water it can draw from Lake Mead.

Officials say an acre-foot, or about 326,000 gallons, is about enough water to supply two southern Nevada homes for a year.