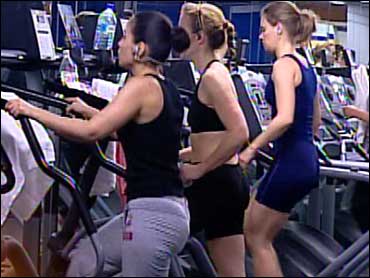 The latest star spouting a lean lifestyle isn't a Hollywood celebrity with a wacky diet, extreme workout routine, or big-bucks trainer. It's a state -- Colorado.

What's up with that? What does Colorado know that the rest of the country doesn't? And short of packing up the wagon and heading west, what can heftier states learn from Colorado?

Here are seven nuggets of Colorado's weight wisdom, from James O. Hill, PhD, director of the Center for Human Nutrition at the University of Colorado Denver and co-founder of America on the Move, a nonprofit group focused on healthy lifestyles.

"That's the first goal," Hill says. "If we could first keep from getting worse, and then gradually start going down, that would be very, very good."

Even in Mississippi, the state with the highest adult obesity rate, "if we can just get 'em started making some small changes in the right direction, so that next year obesity rates don't go up, then over time, you may begin to create more of a culture of health, which exists more in Colorado right now," he says.

2. Cultivate a culture of health.

"I think Colorado has more of a culture of health than other places," Hill says.

Small changes, that is. "The advice to the rest of the country is ... you aren't going to turn this around overnight and so start thinking about a lot of small changes."

Those changes start with behavior -- being more active and eating healthier.

"Little things are important," Hill says. For instance, he recommends getting a pedometer and walking an extra 1,000 steps -- about half a mile -- per day. On the diet side, an example might be watching your portion size.

"Most people can't just turn their life upside down, but they can walk half a mile more," Hill says, adding that you can log those extra steps any time during the day.

"The thing is that you do it. It doesn't matter that you do it all at once," he says. "You never even have to go to the gym, if you don't want to. You can do it just by walking through daily living."

Over time, those small changes make a difference.

Do your surroundings promote a healthy, active lifestyle, or are they kindest to couch potatoes?

True, Colorado has some natural perk like seasons that don't send people fleeing inside. "We have a weather pattern where you can be outside pretty comfortably summer and winter," Hill says. But there's more to it than that.

There's no magic bullet against the obesity trend, and if states get too caught up in debating which approach is best, their efforts could get bogged down.

"There are so many ideas around that in a lot of places, they're working more in opposition than working together," Hill says. "My solution to obesity -- someone else is going to say that's not the right solution at all; you need to do x, y, and z. I think it's been tough for people in a lot of states to come together to try to have a common strategy, and I think we're going to be able to do that in Coloado."

For instance, Hill says that Colorado is trying to work with restaurants to make meals healthier and portions more reasonable. "The thing that makes Colorado different is that the public, private, [and] academic sectors tend to be pretty agreeable to working together to try to find a common goal," he says.

6. Put out the welcome mat.

Colorado's obesity rate might be getting some help from fit people moving to the state. At least, Hill hopes so. "That ability to live a healthy lifestyle is something that people value," he says. "My hope is that we are beginning to attract people who want to come to Colorado because it's easier to be healthy in Colorado."

7. Have some humble pie.

Colorado doesn't have a whole lot of bragging room. Obesity is on the rise nationwide, and Colorado's adult obesity rate of 18.7% is knocking on the door of the upper limit for the "dark blue" color on the CDC map.

"We don't want to get in that next color," Hill says. "I believe with all the efforts going on right now in Colorado, we will stay out of that next color and I wouldn't be surprised if next year, we actually show that rates go down -- probably a little bit, but hopefully in the right direction."