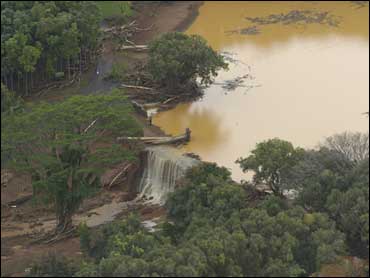 An 1890s-era plantation dam failed in the rugged hills above northern Kauai, sending water and mud from a reservoir surging through two homes and wiping out the only highway. Searchers found one person dead and were looking for at least seven others, some of them children who hadn't been seen since the deluge.

A missing woman "was 7 months pregnant and they're supposed to be getting married Saturday and the families are flying in here for the wedding," neighbor Donna Apisa told CBS affiliate KGMB-TV.

The water crushed the family's house, sweeping away everything and everyone inside.

The continuing rain was hampering the search and road-clearing efforts, and officials were worried that other old earthen dams in the area may have been catastrophically weakened by days of heavy rain, state Sen. Gary L. Hooser said.

One dam in particular was in imminent danger of collapsing, Hooser told ABC's "Good Morning America." He said workers were trying to drain off the water behind it.

"It's still raining. I don't think it's over with. The entire island is kind of flooding in different parts," Hooser said Wednesday. "We're just hoping and praying for the rain to pass and the skies to clear and get on with the work of rebuilding the community."

The water cut off access to and from thousands of rural houses and luxury condominiums along Kauai's north shore.

"Sounded like a 747 jet crashing here in the valley, all the trees popping and snapping and everything," said John Hawthorne. "It was just a horrendous sound, and it never quit."

Search crews recovered the body of an unidentified man, and area residents said one family whose home was swept away was missing several children.

"To my knowledge, there was no warning whatsoever," Hooser said. "We're still hopeful that we'll find some of the missing."

Gov. Linda Lingle, who planned to tour the area Wednesday, extended state disaster programs and services Tuesday to the residents affected by recent rains and flooding. She also made loans available to people whose homes or businesses were damaged and authorized the use of National Guard troops to help with disaster relief.

Residents say they hadn't been warned about potential trouble about the reservoir, reports KGMB's Brooks Bayer. When the clean up is done and the grieving ends, residents will want answers to lots of questions.

Meanwhile, state officials were assessing the safety of other dams in the island's steep hills. Ed Teixeira, state vice director of civil defense, said officials were worried about erosion.

"I would characterize this as a growing crisis on Kauai," he said.

Nearly all of Hawaii's dams were built early in the past century before federal standards existed or the advent of the state's program for assessing dam and levee safety, according to Edwin Matsuda, an engineer who heads the state's safety programs.

The 40-foot-high Kaloko Reservoir dam, which captured runoff from small streams, gave way about an hour before dawn Tuesday.

"That pushed all the water out of there and sent this gigantic wave down the hill across the hill and Kuhio highway and on down toward the ocean, Kapaa resident Dan Teter told KGMB.

Authorities estimated that about 1,400 acre-feet of water poured out of the reservoir, enough water to cover 1,400 acres a foot deep, or more than 60 million cubic feet.

"You could hear a roar and trees breaking. It was nuts. It was totally loud," said Brendan O'Connor, who was awakened by the thunderous sound of rushing water.

Late Tuesday, road crews began clearing mud, trees and other debris from the highway by the truckload until work was stopped so water could be released from Morita Reservoir, state transportation spokesman Scott Ishikawa said.

One lifelong north shore resident, Be Chandler, waited patiently in her pickup truck in hopes her mother, who was stranded on the other side of the Kuhio Highway, would be allowed through. Her 74-year-old mother is in a wheelchair and requires dialysis three times a week.

"Somehow, we have to get her over," said Chandler. "I'm just praying to see my mom."

Roy Matsuda, lead forecaster at the Honolulu office of the National Weather Service, said Tuesday that a storm had dumped 5 to 6 inches of rain on Kauai in 24 hours.

An exhausted Katie Carlin, of San Mateo, Calif., arrived Monday night with her husband and two young children only to find they were unable to reach their hotel room in Hanalei because of a flooded bridge.

"We're trapped," she said. "It's small potatoes to what's going on here, but I just don't want to spend another night in the car."