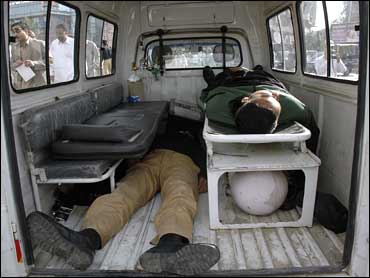 At least a dozen men ambushed Sri Lanka's cricket team with rifles, grenades and rocket launchers Tuesday as they drove to the stadium ahead of a match in Pakistan, killing six policemen and a driver.

The attackers struck as a convoy carrying the squad and match officials reached a traffic circle 100 yards from the main sports stadium in the eastern city of Lahore, triggering a 15-minute gunbattle with police guarding the vehicles.

Seven players, an umpire and a coach were wounded, none with life-threatening injuries.

The assault was one of the worst terrorist attacks on a sports team since Palestinian militants killed 11 Israeli athletes at the 1972 Munich Olympics.

CBS News' Farhan Bokhari reported that senior Western diplomats and Pakistani security officials investigating the attack said they were looking into the possibility of the attackers being linked to al Qaeda or the Taliban.

A senior Western diplomat, who spoke to Bokhari on condition of anonymity from a European capital, said the attack may well have been the work of one of those groups.

Tuesday's attackers melted away into the city, and none was killed or captured, city police chief Haji Habibur Rehman said. Authorities did not speculate on the identities of the attackers or their motives, but the chief suspects will be Islamist militants, some with links to al Qaeda, who have staged high-profile attacks on civilian targets before.

The bus driver, Mohammad Khalil, accelerated as bullets ripped into the vehicle and explosions rocked the air, steering the team to the safety of the stadium. The players - some of them wounded - ducked down and shouted "Go! Go!" as he drove through the ambush.

The attack reinforced perceptions that nuclear-armed Pakistan is veering out of control under terrorist assault.

The head of Pakistan's Interior Ministry, Rehman Malik, said the country was "in a state of war."

"We will flush out all these terrorists from this country," he vowed late Tuesday.

Sri Lanka had agreed to this tour - allowing Pakistan to host its first test matches in 14 months - only after India and Australia backed out of scheduled trips over security concerns. The assault will end hopes of international cricket teams - or any sports teams - playing in the country for months, if not years.

Tuesday's attack came three months after the Mumbai terror strikes that killed 164 people. Those raids were allegedly carried out by Pakistan militants, and the assault in Lahore resembled them in many respects. Both were coordinated attacks, used multiple gunmen, apparently in teams of two, who were armed with explosives and assault rifles and apparently had little fear of death or capture.

Pakistani officials admitted - after a stream of accusations from India and suspicions from other nations - that the Mumbai attacks were at least partly planned from inside their country.

Analysts and officials who spoke to CBS News widely suspected the banned Pakistani militant group Lashkar-e-Taiba of staging the siege in Mumbai.

"Lashkar-e-Taiba's foot soldiers may be involved in this attack," a Pakistani intelligence official in Lahore told Bokhari on condition of anonymity.

The official said there was little evidence to suggest that the group's "high command" was involved in planning the attack, but added, "This attack has some resemblance to Lashkar-e-Taiba's tactics."

Western diplomats warned, however, that Pakistani officials would likely draw comparisons between the two attacks. The Indian government accused elements in Pakistan's intelligence services of having links to the Mumbai attackers - a charge repeatedly denied by Pakistan.

"The Pakistanis have said since Mumbai that they are as much victims of terrorism as anybody else. If they now say, 'it's the Lashkar,' we have to verify that independently," said a Western diplomat in Islamabad, who spoke to CBS News on condition of anonymity.

Authorities will also consider possible links to Sri Lanka's Tamil Tiger separatist rebels who are being badly hit in a military offensive at home, though Sri Lankan military spokesman Brig. Udaya Nanayakkara said it was unlikely the group was involved.

A special flight is expected to bring the players home in the early hours of Wednesday, according to a Sri Lankan Foreign Ministry official.

TV footage of the attack showed at least two pairs of gunmen with backpacks firing from a stretch of grass and taking cover behind a small monument before moving on. It was taken from the offices of a Pakistani news channel overlooking the site of the ambush.

"These people were highly trained and highly armed. The way they were holding their guns, the way they were taking aim and shooting at the police, it shows they were not ordinary people," said Salman Taseer, the governor of Punjab province. "This is the same style as the terrorists who attacked Mumbai."

"It is a terrible incident, and I am lost for words," said Steve Davis, an Australian who was to have umpired the match.

Lahore police chief Rehman said "between 12 and 14 men" took part in the assault and they resembled Pashtuns, the ethnic group that hails from close to the Afghan border, the stronghold of al Qaeda and the Taliban. He said officers were hunting them down.

Two Sri Lankan players - Thilan Samaraweera and Tharanga Paranavitana - were being treated for bullet wounds in a hospital but were stable, said Chamara Ranavira, a spokesman for the Sri Lankan High Commission.

Haider Ashraf, another police officer, said six policemen and a driver of a Pakistan Cricket Board vehicle were killed.

Sri Lankan Foreign Secretary Palitha Kohona said little could be done to stop such an attack, saying "there is never enough security to counter a well organized and determined terrorist group."

The Dubai-based International Cricket Council condemned the attack. But ICC President David Morgan told the British Broadcasting Corp. that the organization had no role in deciding on whether Pakistan was safe enough for a tour since Sri Lanka and Pakistan agreed to the match.

In the past, India and Pakistan have blamed each other for attacks on their territories. Any allegations like that will trigger fresh tensions between the countries, which are already dangerously high.