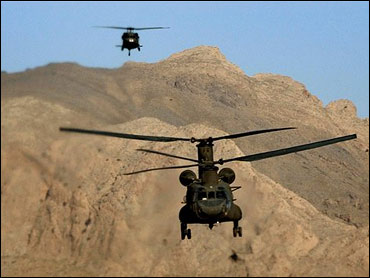 Five Americans and two other soldiers died when a Chinook helicopter was apparently shot down in Afghanistan's most volatile province, a U.S. military official said. The Taliban claimed responsibility.

NATO's International Security Assistance Force said other troops rushing to the scene were ambushed and had to call in air support to drive off their attackers.

Initial reports suggested the helicopter was hit with a rocket-propelled grenade on Wednesday evening, said the U.S. official, who insisted on speaking anonymously because the crash is under investigation. NATO said there were no survivors.

A purported Taliban spokesman, Qari Yousef Ahmadi, claimed in a phone call to The Associated Press that militants shot the helicopter down in southern Helmand province, the world's largest opium poppy-growing region where combat has been heavy in recent months.

Ahmadi did not offer any proof for his claim, but he specified the helicopter crashed in the Kajaki district hours before NATO reported that information. Kajaki is the site of a hydroelectric dam and the scene of recent fighting.

NATO said the CH-47 Chinook was carrying a crew of five and two military passengers when it crashed at about 9 p.m. local time. The cause is "being determined by military officials," it said. The nationality of the two other dead soldiers has not been released.

NATO said troops going to the crash site were ambushed by enemy fighters and the unit called in an airstrike "to eliminate the enemy threat." It did not say if the troops were from the U.S.-led coalition, NATO's force or the Afghan army. One civilian was injured by gunfire.

The CH-47 Chinook, a heavy transport helicopter with two rotors, can carry around 40 soldiers plus a small crew. The fact that it was flying at night suggests the aircraft could have been carrying troops on a nighttime air assault.

Kajaki is the site of a large U.S.-funded hydroelectric dam now being repaired so it can provide electricity to the southern city of Kandahar. British troops, who make up the bulk of the forces in Helmand province, have been engaged in fierce fighting around the dam protecting it.

The NATO force, which is responsible for a countrywide counter-insurgency campaign, has 37,000 soldiers, including about 14,000 Americans. There are 12,000 U.S. troops in the separate U.S.-led coalition, which trains the Afghan army and conducts Special Forces anti-terrorism operations.

Helicopter crashes in Afghanistan have been relatively rare. A Chinook crashed in February in the southern province of Zabul, killing eight U.S. personnel. Officials ruled out enemy fire as the cause.

In May 2006, another Chinook crashed attempting a nighttime landing on a small mountaintop in eastern Kunar province, killing 10 U.S. soldiers.

In 2005, a U.S. helicopter crashed in Kunar, after apparently being hit by a rocket-propelled grenade, killing 16 Americans.

Hours before Wednesday's helicopter attack, a senior U.S. military official, briefing reporters on the war effort, said the U.S. has "the Taliban on their heels" in Afghanistan.

Brig. Gen. Perry Wiggins, deputy director of operations for the Joint Chiefs of Staff, told reporters at the Pentagon that "the Taliban has suffered numerous losses and has suffered losses to their senior leadership over this past month" in southern and eastern Afghanistan. As a result, said Wiggins, the Taliban has "reverted to asymmetric-type, small-scale, high-profile attacks."

Mullah Dadullah, a one-legged veteran who orchestrated an intensifying campaign of suicide attacks and beheadings, was killed in an operation in southern Afghanistan this month. He had been considered the top Taliban field commander.

Wiggins added that as the poppy harvest ends, more insurgents might join the battle.

"The fight's not over," he said. "We'll continue to take the offensive through several of the operations we have in Afghanistan, and hopefully... continue to inflict casualties on the Taliban."